Haven't seen the film, don't even know the genre for sure, but with Fukasaku, Sugimoto, Watase and Murota this looks like a must see.
Last edited by HungFist on 01 Apr 2009, 16:03, edited 10 times in total.
Top

Bank Heist/Crime films are a hard sell right now. I can try. A friend's got that tape, so it would make it easier with a little background ie I need to watch it.

Linn wrote:Bank Heist/Crime films are a hard sell right now. I can try. A friend's got that tape, so it would make it easier with a little background ie I need to watch it.

September is a Norifumi Suzuki month October is a Sonny Chiba month Lets see what's up with Animeigo. They may not be a great company, but they have great titles. Seems like they've acquired rights to some Shinobi no mono films. Love this banner:

The first film was released last month. Parts 2-4 are also listed at their website as upcoming titles.

The Mikogami trilogy (The Trail of Blood, The Fearless Avenger, Slaughter in the Snow), directed by Kazuo Ikehiro and starring Yoshio Harada, will be re-released in box set. The price is notably more affordable than the single releases put together. Reviews suggest that the first film has a terrible transfer, but the second is fine.

Hideo Gosha's The Wolves should be coming in May 2008. That's not available on R2J, but Wild Side Video may have the rights in France. Speaking of Gosha, HK Video third box set should finally be out in December, and Wild Side's Hitokiri (Tenchu) is scheduled for the same month (never been released on dvd before). Finally, some R2J Gosha's will be re-released as low priced editions later this month.
Top

I forgot to mention that Toei’s December releases also include 'Toei Tokusatsu Hero: The Movie Box'. Since I don’t know anything about the subject I’m gonna quote someone who does:


Muldoon / [url=http://adg.invisionzone.com/index.php?showtopic=522&st=48]asiandvdguide[/url] wrote: This box set contains most of the tokusatsu films made by Toei from 1966 to 1995 (excluding the Kamen Rider, Super Sentai, and Spiderman films). It will contain 32 films total (19 of which have never been released on DVD). These short films were made at the same time as the corresponding TV series.

The bonus disc will include the three tokusatsu films that were made in 3D (Red Shadow, Kikaider, and Inazuman). 3D glasses will be included with the box set.

Tokusatsu fans have been mad at Toei for not always including the films with the DVDs of the TV series but Toei has now made up for their mistakes. Needless to day, this is an essential purchase for tokusatsu maniacs. Start saving now!

The street price is set to 30 000 yen (that’s typical from Toei, I’m afraid... the reason why I don’t own their Sukeban Deka series on dvd...) but amazon is taking pre-orders for 23 000 yen at the moment. Their DHL only policy may still make it unaffordable, though.

Kazuhiko Hasegawa is a hugely interesting screenwriter / film maker with only two directorial credits to his name; this and The Man Who Stole the Sun (1979). That’s why it’s such a shame The Youth Killer fails partly. Although based on true story, Hasegawa’s film doesn’t feel entirely believable. The way the characters act in some situations seems a bit unfit, and some of the performances are less than natural. Nevertheless, the cast also features interesting choices like Ryohei Uchida as the main character’s father, and Mieko Harada (who also made a memorable appearance in the 7th Truck Yaro film, one of my favourite film series from the 70’s) in the female lead. Some single scenes here and there are very impressive. Last but not least, the nostalgic soundtrack filled with english language songs by Godiego is brilliant.

Not a bad transfer, the muddiness and scratches work to the benefit of the film (to some extent at least). Nevertheless, the original trailer has a sharper and less muddy appearance (and also 1.85:1 aspect ratio, but it only seems to be missing image from top and bottom). I would provide a comparison cap but I can't find matching frames. I tried with four different scenes and always the same thing; the film and the trailer use different takes.

Extras include a 16 page booklet, original trailer (with clips of deleted scenes and behind the scenes footage), biographies and a 64 min documentary. The documentary is also loaded with great stills, from which I, to my big surprise, spotted Shinji Somai. Turned out he worked as one of the assistant directors in this film (and also in The Man Who Stole the Sun).

Hasegawa's both films seem to be going out of print. Apparently The Youth Killer was re-released earlier this year, but cdjapan isn't listing it at all, the only have the original release with is of course unavailable. They also list all R2J editions of The Man Who Stole the Sun out of print. I got both films recently from yesasia, but it may be better to hurry if you want to add these films to your collection.

A few caps from the making of

The band that performed the soundtrack, Godiego

Shinji Somai, the greatest japanese director of the 80's, on the left

Kazuhiko Hasegawa, the screenwriter of the masterful cop film Retreat Through the Wet Wasteland, takes the directing duties in the most interesting film of the 70’s. Kenji Sawada plays a high school science teacher who decides to build an atomic bomb of his own. The film begins as a masterpiece but unfortunately, and for a reason that I couldn’t quite figure out, the director takes the film so over the top at the end, that it loses all its credibility. Perhaps Hasegawa wanted to further underline the fact that the film is indeed a black comedy, although a somewhat restrained one most of the time, but the outcome is nevertheless wrong. Still, even with the flaws the film is amazingly fascinating and memorable.

The R2J calls itself "Ultimate Premium Edition", which translates as remastered transfer, 2.0 and 5.1 audio and original trailer...* And yes, english subtitles are included. There's also a cheap HK dvd but it's supposed to be crap. They even gave the characters new, chinese names. Finally, as one last warning, regardless of the edition this movie may cause deep depression when you realize you ain't gonna find anything as interesting within the next 10 years.

EDIT: I was not aware an oop 2 disc edition existed. I have it now, will review some day but not anytime soon. It comes with a couple of hours worth of new and old interviews (also loads of behind the scenes stills) and a booklet.

Iron King looks like something out of Power Rangers

It was released in Germany last year I think. 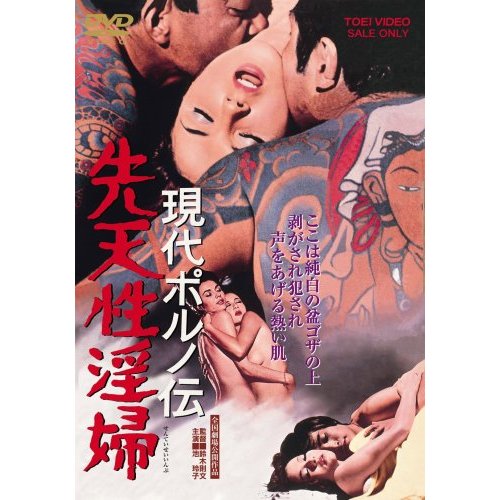 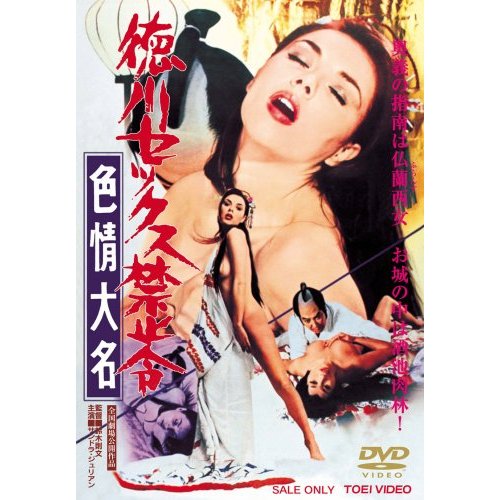 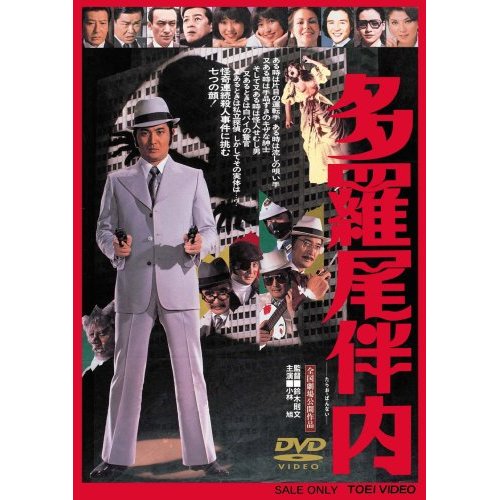 Toei Studios’s b/w war film about the Japanese kamikaze pilots in WWII is perhaps the most touching movie I have ever seen. There’s a bit of sentimentialism, but director Junya Sato handles the tragic subject masterfully. The cast is filled with major stars such as Ken Takakura, Bunta Sugawara, Tatsuo Umemiya, Asao Koike and Junko Fuji but they all play their roles extremely well. Especially the lead actor Koji Tsuruta is amazing. Tomisaburo Wakayama and his humoristic character are the only ones that feel slightly out of place. His appearence takes place mostly during the film’s middle third, which is the weakest and least engaging part of the movie. However, the film being this heavy themed it may actually work to the benefit of the film in the end. The last third is even more gripping than the first. Simply one of the best war movies ever made.

The film is available on Toei's unsubbed dvd. The quality is the dvd varies a bit. Some scenes look a bit messy while others look good. It's perfectly watchable and in my opinion the genre (realistic b&w war movie, and very "rare" on the top of that) made it even less of a problem. But while I was never distacted by any of the dvds shortcomings, this does not always look like a film made in 1970.

Next week there will be a R2J re-release for Yasuhare Hasebe's Fossilized Wilderness (Kaseki no kouya) (化石の荒野) (1982). I don't know anything about the film except that it stars Tsunehiko Watase, Isao Natsuyagi, Eiji Go, Hideo Murota and Jo Shishido, and what cdjapan says about it: "5000 kilos worth of gold disappears at the end of WWII. 36 years later, one man's career reveals the hidden secrets behind the conspiracy." 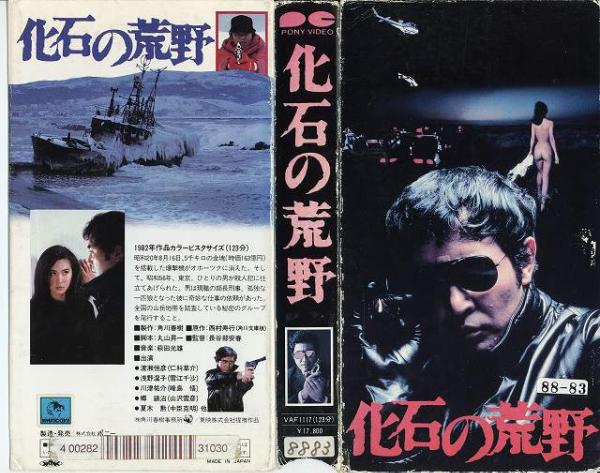 Would I enjoy the LW+C TV show if I like the films Hung?

(I have the Thai box set).
My Profiler: