I'm most looking forward to Matsui's entry. He's done some good, heartfelt youth films. I loved his film 私たちのハァハァ which I saw at Yubari in 2015.
https://www.youtube.com/watch?v=I7lr8afQgY8

I'm less enthusiast about Kaneko who hasn't done a good film in ages. Shiraishi is a complete question mark, his film could end up great or complete crap.
Top

That's a boring and disappointing line-up of directors. I only watched 2 films from the last reboot and I may sit this one out comepletely unless the trailers/reviews prove my negativity wrong.
Top

Guro Taku wrote: ↑20 Nov 2021, 09:36 That's a boring and disappointing line-up of directors. I only watched 2 films from the last reboot and I may sit this one out comepletely unless the trailers/reviews prove my negativity wrong.

I thought the previous reboot was pretty good. I liked all of them except White Lily, which was embarrassingly bad IMO.Which ones did you watch?
Top

WET WOMAN IN THE WIND and ANTIPORNO.
Top

HungFist wrote: ↑20 Nov 2021, 08:27Shiraishi is a complete question mark, his film could end up great or complete crap.

I'm finally properly back on the film festival circuit these weeks and had time to kill between screenings yesterday, so I ended up watching Shiraishi's entry 愛してる！, which seems to have gotten the English title SAFE WORD. To my surprise, I really enjoyed the film! It's about Misa, a former female pro-wrestler (Chisako Kawase) who wants to transition to being an idol and hires a documentary crew to film her journey. The film is essentially that documentary but everything is filmed without shaky cam or other found footage nonsense, so I forgot about that fact several times until the film reminded me of it. Anyway, after Misa uses her wrestling moves against a guy at a meet-and-greet, she gets invited to audition at a club called "H". Clearly a bit naive, she thinks it's an idol performance type gig but quickly is informed that they want her to become a dominatrix. Initially reluctant, she agrees, but before becoming a domina, apparently you first have to be trained as a slave... If Misa had been a bored and neglected housewife, this scenario would instantly make my eyes glaze over, but since she's a former wrestler and has the attitude to match, things are more interesting. Not only but also because of this, the film is frequently hilarious, especially with the right audience. It's also well acted (Kawase is the obvious stand-out, since she has to deliver a really broad range of emotions in addition to handling the kind of explicit scenes you'd expect) and shot, despite the documentary-style approach.

The film was preceded by a video message from Shiraishi, who explained that his intentions and message are basically that people should express their emotions more often. If you love someone, you should tell them. This makes sense, considering the film's lead is told to use something she never ever says as her safeword for the S&M sessions, and that she settles for 愛してる！ / I love you!
Top

That's good to hear... in case I ever get to see these theatrically. These are playing / booked to everywhere... except Hokkaido. Just typical.
Top

That sucks but going by what you reported about Japanese theatrical audiences in general, I doubt it'd be comparable to a European film festival crowd anyway.

Also, for a quick laugh check out what the film is called on the ever-reliable IMDb: 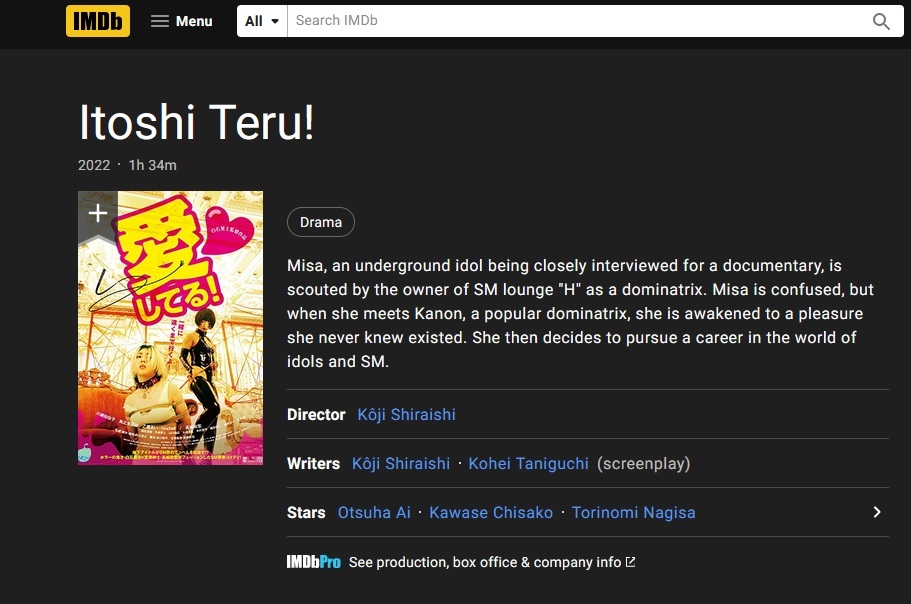 Sure, the kanji 愛 can be read as "Itoshi" if it's used in a name but definitely not if it's used as a verb. Maybe don't input titles into a database if you lack the most basic skills in the language?
Top

Lol. I've seen title mistakes in IMDb before but this is the best by far

I (finally) caught all three in cinema. Daigo Matsu’s “Hand” was expectedly good: a delicate, thoughtful, even touching young adults drama with fine performances and not all that much sex (though it does feature one of the cutest and funniest sex scenes ever). Shusuke Kaneko’s “When the Rain Falls” was expectedly weak; a clumsy lesbian affair trying to pass for finer art than it is. But it was Koji Shiraishi’s S&M picture “Safe Word” that delivered the real surprise; a delightful female empowerment piece with an incredibly funny lead performance by newcomer Misako Kawase as a female pro wrestler gone badly performing pop idol scouted as dominatrix!

I was glad that the local cinema I watched this put the films on their 2nd biggest screen (out of 4) and gave them all two week runs (even though they were scheduled to play only one week). A few months ago I watched Night of the Living Dead on the same screen. I don’t think any of these were huge audience draws, but I think the theatre management is just showing love to cool films by putting them on some of their biggest screens.

Overall, I had good time with these and I hope Nikkatsu does another set in maybe 5 years. I’d love to see Ken Ninomiya direct one, and maybe Daisuke Miura and Mari Asato, too.

Safe Word (愛してる！) (Japan, 2022) [DCP] – 3.5/5
When Nikkatsu announced their directors for the Roman Porno Now project, it was not hard to guess Daigo Matsui would fare well, and Shusuke Kaneko would deliver a stinker. But Koji Shiraishi tackling S&M was a complete question mark. Happily for us, this may be the best of the bunch. The gloriously bonkers, endlessly uplifting and sympathetic tale follows a female pro wrestler gone badly performing idol (phenomenally good, funny and cute newcomer Misako Kawase) scouted by an S&M club owner (almost equally good non-binary model/talent Ryuchell) as dominatrix. Only she doesn't initially realize it's an S&M job, and requires going through the "slave" part first, which results in lots of extremely funny reactions, especially since she sports quite an attitude and a wrestler's physical responses. This film is really quite the opposite of a vintage Nikkatsu S&M film where noble Naomi Tani would be subjugated to a blue collar male power / sexual get-even fantasy. Shiraishi's film instead is a female empowerment piece and a love song to being a happy pervert. Here all the "S" is committed by women to men, or by women to women, who all enjoy it. Shiraishi shoots it in his trademark faux documentary style (done well enough for you to stop noticing it almost immediately) and lets the film run too long (10-15 min could have been snapped from the 94), but the first grade direction and superb performances really make this quite a cheerful experience. And yes, not to belittle Shiraishi, but this feels like early 2000s Sion Sono in more ways than one.

Good to see you got to see them theatrically after all! We seem to be in almost complete agreement about SAFE WORD. I'd personally even give it a 4/5. One of the highlights of this year for me. I'll check out HAND when I get the chance and most likely avoid the Kaneko flick. Life's too short.
Top
Post Reply
12 posts • Page 1 of 1