Film aficionado Takuzo Kawatani, whose life aim is to watch a movie in theatre every day for 20 years, makes friends with student boy Naohiko Shigeta and his girlfriend Atsuko Asano whose delinquent girl antics and yakuza affiliations proves troubling, in 1969 Tokyo. This was Masato Harada’s (Kamikaze Taxi, Bounce ko gals) first film, a love letter to cinema. Toei’s live action Donald Duck Kawatani gives a heartfelt performance in the lead. He’s best know as a Piranha Gang member (a group of Toei bit-player hell raisers who spent their nights drunk and days competing who gets the most outrageous on-screen deaths; fellow piranha Hideo Murota is in this film too). But those who saw him in Fukasaku’s Gambling Den Heist already knew the underlying talent he had for tragicomedy. Here, from the opening where he runs himself breathless to catch a movie, to reciting movie dialogue at every chance, doing a Dancing in the Rain number, and studying Ken Takakura movies to learn how to deal with the yakuza, Kawatani just oozes sympathy. The film’s weakness is giving too much of (the excessive 110 min) runtime to the good but less interesting Shigeta.

Screencaps from the semi-recent DIG DVD. I'm not sure what to make of the visual look, but it doesn't seem likely we'll ever get anything else on disc, so that's it. Get it if you want it.

And they call it classic

As usual with Media Blasters, I'll be SHOCKED if it isn't a low-quality upscale.
Top

Macross is free from licensing jail! English subbed BDs are highly likely on the table now, especially with Funimation signal boosting the news. Gimme SDF, DYRL, Plus, Zero and Frontier! (FUNi are trash, but they can do whatever the fuck they want with their dubs because I won't ever listen to them.)
https://archive.ph/NFbWg
https://archive.ph/4lL7m

*Shrug* I only own a couple discs from them. The Kite Uncut BD I have of theirs looks pretty good (sans the splicing in of seemingly VHS sourced footage to make the OVA uncut of course) and definitely seemed to be sourced from a HD master scanned from film. 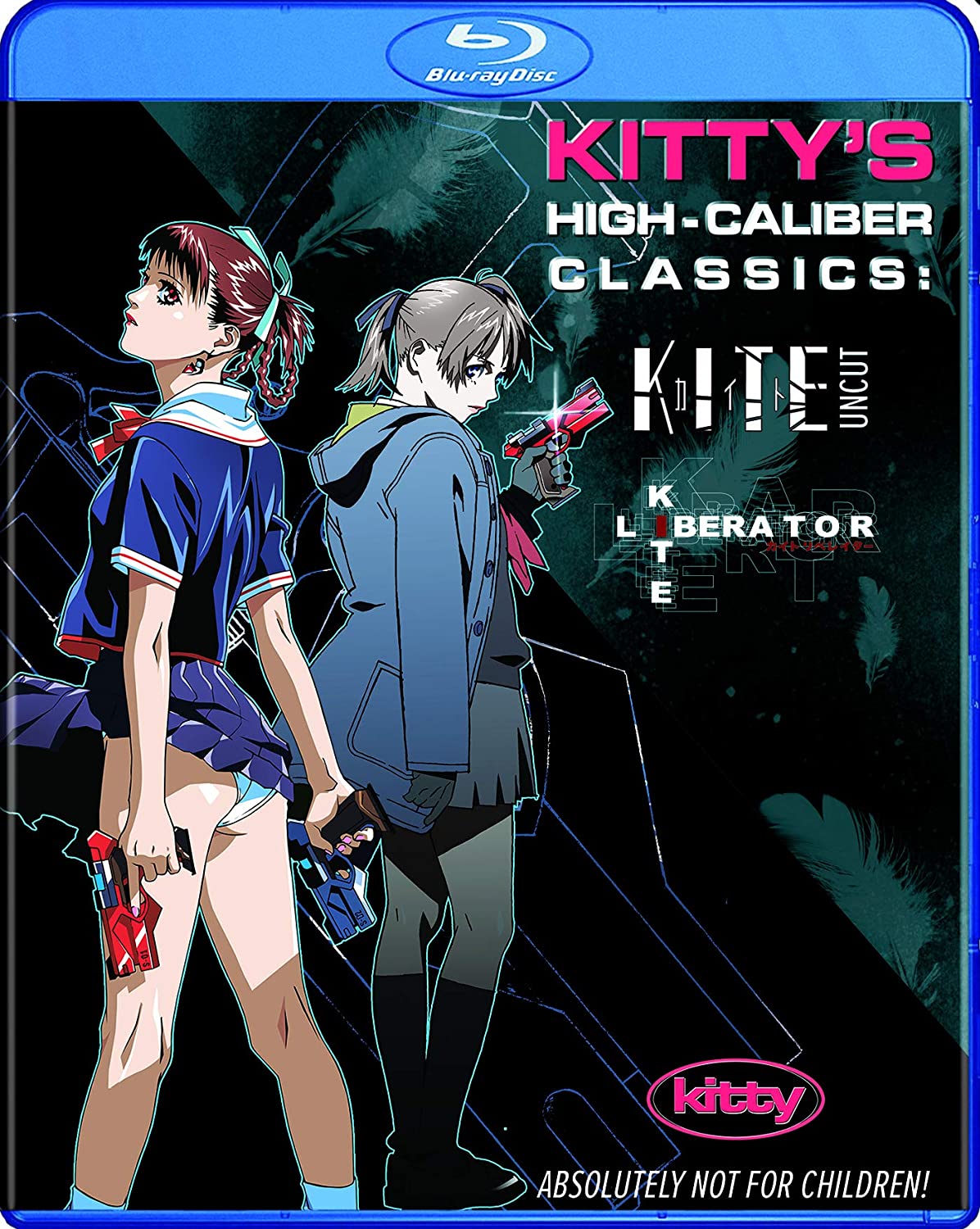 Not upscales, confirmed. They're taking Kitamura's Alive from a film master too.
https://archive.ph/YdQvf
Top

To be fair he's calling it a "classic" Tokyo Shock title, i.e. an old DVD release of theirs and not a classic film per se!

Yeah, their twitter account looks pretty promising and I don't mind having been wrong if it means we get decent releases out of it. Guess that means they were finally able to shake government/IRS control after their tax problems all those years ago? Didn't exactly believe they'd survive all that. I've had a love/hate relationship with them since the early days of their DVD releases: on the one hand whoever picks their licenses must have a pretty similar taste in film as me, on the other hand pretty much every release of theirs was flawed and buggy in some way. Guess we'll see how their BDs turn out. I can't believe we're getting 4K remasters of ALIVE and SKY HIGH before we get AZUMI, though.
Top

Guro Taku wrote: ↑24 Apr 2021, 07:45 Guess that means they were finally able to shake government/IRS control after their tax problems all those years ago? Didn't exactly believe they'd survive all that

Toei is celebrating its 70th anniversary this year! With seven new DVD releases in July to September!

(I know, no Blu-Ray. I have already recorded most of these in HD from Toei Channel…)

Gonna definitely pick up those first two. Thanks for the news!
Top

Toei's biggest yakuza film of 1973 (this left Battles without Honor and Humanity behind at the box office), and shameless promotion for the country's biggest criminal organization. The film chronicles Yamaguchi gumi boss Kazuo Taoka's rise from rags to ranks in pre WWII Japan, based on his serialized biography in Weekly Asahi Geino. What's curious is that it was brought to the screen by chivalrous Ken Takakura and Kosaku Yamashita as their first jitsuroku film. What it amounts to is an oddly entertaining fusion of cinematic styles, a true account that plays out much like a ninkyo film. There are moments of ultra-violence (Taoka's trademark move is sticking his fingers in the opponent's eyes like a pre-war Sonny Chiba!) and documentary esque jitsuroku touches sprinkled throughout of what is ultimately a romanticized gangster tale of male bonding and honour. The word is Toei producer Okada went full-on bromance with Taoka and even hired his non-yakuza son as producer, in addition to the cast partying and hanging out with the still-active gangster boss, something that should instantly cast a doubt on exactly how truthful the film is. And yet, in its own flawed way, this is one of the most interesting films of the jitsuroku movement.

The screencaps are from TV (Toei Channel) but this is also available in Toei DVD.

Trademark move! I boosted the brightness of just this one cap to make easier to see

Brothers without fingers. With Bunta Sugawara

“They were all yakuza in that company” – Noboru Ando about Toei *

I’m not sure how many of us have realized this, but Mitsuru Taoka, who served as producer / planner in at least 10 Toei yakuza films, was the son of Yamaguchi gumi boss Kazuo Taoka (田岡一雄)! While not a yakuza, Taoka jr. worked on several films about the Yamaguchi gumi, including two biopics about his dad!

His father Kazuo Taoka was the third kumicho of the Yamaguchi-gumi from 1946 to 1981. That didn’t seem to bother Toei at all. Wikipedia mentions he was close friends with Ken Takakura (Takakura visited him in hospital after his heart attack in 1965, and apparently was saved by Taoka from drunken Akira Kobayashi who insisted on giving his expensive wrist watch to Takakura as a gift, lol!). Toei producer Shigeru Okada is claimed to have gone full of bromance with Taoka. And there’s a photo of Koji Tsuruta drinking with Taoka in the 1950s!

Anyway, I don’t know details about Mitsuru Taoka, but here is his producer (planner) filmography:

I'm having difficulties finding a photo of Mitsuru Taoka, but here's his father Kazuo Taoka (middle) partying with Koji Tsurura (right) in 1952

* I forgot where that quote was from. Probably Mark Schilling’s Ando interview?
Top

There will be two box sets each containing 11 films (on 4 discs). However, two of the 24 films will not be included. Parts 9 (顔のない女 / 1959) and 18(謎の赤電話 / 1962) are omitted because of “various reasons” (諸般の事情により収録されておりません). It doesn’t give proper explanation why, so perhaps the negatives are damaged beyond repair? When Toei released the Tarao Bannai (多羅尾伴内) films earlier this month, they specifically stated one film was missing because the print was lost.

The crazy thing however is that part 9 (顔のない女) is actually scheduled to be shown on Toei Channel next month! So why not include it in the DVD set?

The good news is the three films Sonny Chiba appears in (不在証明 / 十五才の女 / 12人の刑事) are included.

Oh, Toei is celebrating the upcoming Blood of the Wolves 2 with some outlaw cinema on DVD. The selection includes three DVD debuts (some of these may have been available with the DeAgostini magazines, though).

Got myself two new (or rather very old) posters.

That's very cheap and would be a good investment even if weren't a fan of the movies. I have seen the Zero Woman poster go for a couple hundred dollars on ebay.
Top

The Legend of Love and Sincerity: Continuation (Zoku Ai to Makoto) (続愛と誠) (1975)

The first film, The Legend of Love and Sincerity (1974), was a love story between delinquent boy Makoto and high class girl Ai. The film was a big success, perhaps because of the manga’s popularity and Makoto being played by pop idol Hideki Saijo (according to a story that may be true, Shochiku actresses all turned down the role of Ai in fear of being lynched by Saijo fan girls, and the actress was then chosen by auditioning 40 000 girls).

The second film, IMHO, outdoes the original in every way. It is, in fact, a sukeban film. Makoto (this time played by Koji Nanjo) has transferred to a new school, a low level dump ruled by a sadistic girl gang. Ai (Ai Saotome) follows Makoto to the new school and makes friends with sweet looking Yuki (excellent Yumi Takigawa from Toei’s School of the Holy Beast) who turns out to be a "shadow bancho" secretly leading the gang. Then we have a new teacher who tries to handle the situation by beating the hell out of the delinquent girls! He is, in fact, a proficient karate fighter!

Though done by the same people as the first film, this is much more action packed and outrageous, often visually imaginative, and packed with those lovely images of badass (or just plain cute in case of Ai) girls walking the city streets. Oh, and this has just about the only scene I can recall of a schoolgirl driving a convertible! Very entertaining, if much lighter and less nihilist than Toei’s sukeban films as you’d expect from an idol film.

Screencaps from the Shochiku DVD

Makoto is not good with girls

Nor is the new teacher

While this movie is easy to recommend to anyone interested in (lighter) sukeban films, the same can't necessarily be said about the other two films. Part 1 is a (non) love story between Makoto and Ai, and part 3 plays out like a Toei delinquent boy actioner but without any punch or edge. Neither one of them feature any sukeban characters.
Top

Some of you are probably aware that Toei has a 4K version of Battles without Honour and Humanity (1973). So should you feel left out with your 2K Arrow BD? Short answer: no.

The new 4K master was on TV last month as a 2K down-convert, so I decided to check it out. Now, keep in mind this was a down-convert and heavily compressed for TV. Even that considered it doesn’t look nearly as good as the BD, with heavy green tint all over the film.

Toei are really lazy at doing colour correction for negatives that have deteriorated over time, or perhaps in the recent years they have just decided that movies ought to look green. I’ve been particularly disappointed with the recent Teruo Ishii ero guro masters which have similar green look, unlike the beautiful 35mm prints that frequently play in Tokyo (I’ve seen most of those 2-3 times).

The TV caps are from my BD recording, taken with MPCHC. For rough reference.
The BD caps I borrowed from Caps-a-holic since my disc resides on the old continent.
https://caps-a-holic.com/c.php?d1=6960&d2=6965&c=2832

Also got Female Yakuza Tale to complement Zero Woman (Reiko vs. Miki on my wall!)