VoD Review / Not Available on DVD

Song of the Night: Woman (夜の歌謡シリーズ おんな) (1969)
Part 8 in the Night series, a hugely atmospheric nocturnal drama about bar girl Yumiko Nogiwa coming across night hustler Tatsuo Umemiya. The film opens with devastated Nogiwa pulling a knife on Umemiya. "Go ahead, stab me. I'll give you a present, a worthless life" he says with tired voice, before the film cuts back to show how things came to this. Turns out Nogiwa used to be working in as a hostess for a mean mama Yasuko Matsui and Umemiya, then light headed little sister (Teruo Ishii muse Masumi Tachibana) arrived the town to further complicate things. This is visually intoxicating, remarkably well written By Masashige Narusawa) and atmospheric film with great performances. Umemiya in particular is excellent as impulsive and tragic sociopath who is not in full control of himself. He is, in fact, keeping up appearances while being too weak to leave Matsui. Director Ryuichi Takamori deserves credit for not fucking this up; in fact he does really well. The only weakness is the films 2nd half which, while good, doesn't quite have the momentum of the 1st. But this is still a very good film.

Kyomaiko satsujin jiken: Kyofu no uwaki shutcho (京舞妓殺人事件 恐怖の浮気出張) (1980)
Teddy bear family man Hiroyuki Nagato visits Kyoto on business, soon has a dead geisha in his hands and the police on his tail. Annoying TV film / Kyoto travel advertisement full of "funny overacting" and "old man does silly mistakes" scenes as Nagato tries to hide from the police. Awful musical score completes the wreckage. Phenomenal waste of talent in the casting: pink hip girl Kahori Takeda as travel guide co-star (also does a tiny bit of awful karate), fellow Roman Porno star Junko Miyashita as older (alive) geisha, Escape From Reform School runaway Fujika Omori as younger (dead) geisha, Tatsuo Endo is in the film too, and even Etsuko Shihomi appears for about one minute as a lady cop. And the film is directed by bloody Yuji "Shogun's Sadism" Makiguchi! And written by Atsushi Yamatoya! Shows how Japanese TV can turn men into pale shadows of their former selves, except there's not even a shadow left here. The title translates roughly as The Kyoto Geisha Murder Case: Horrifying Illicit Business Trip. Should've been The TV Viewer Suicide Case: Horrifying Boring Movie Experience. 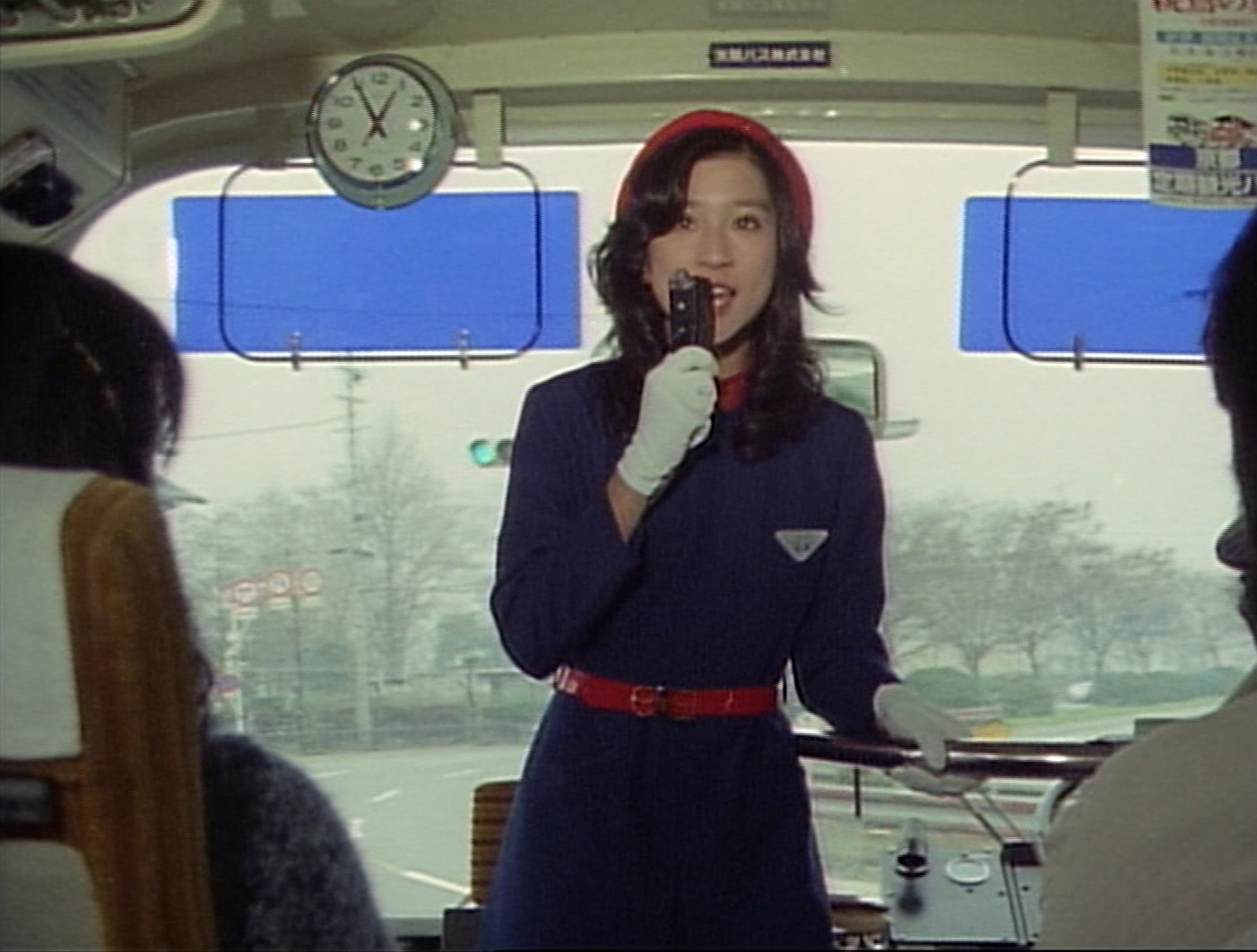 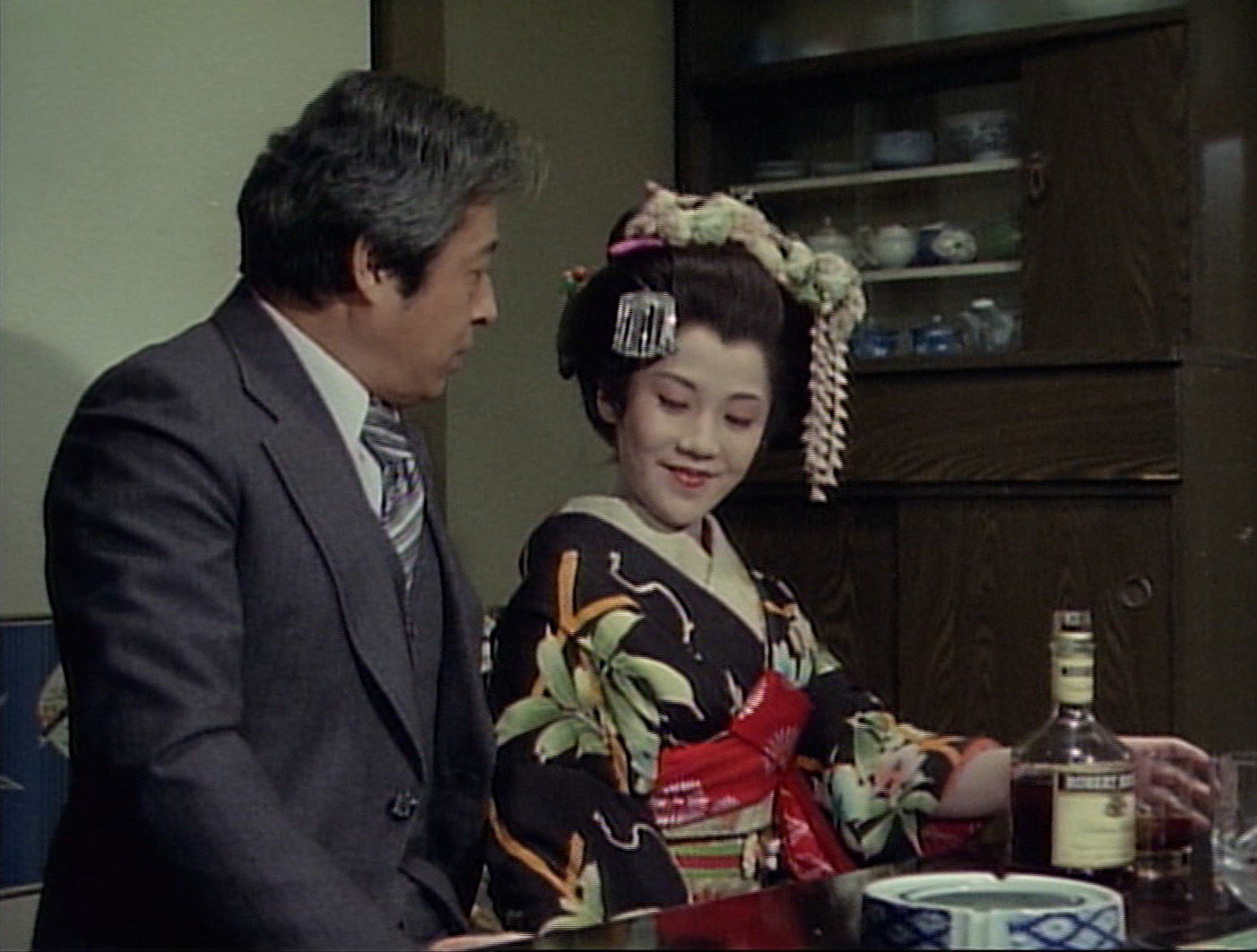 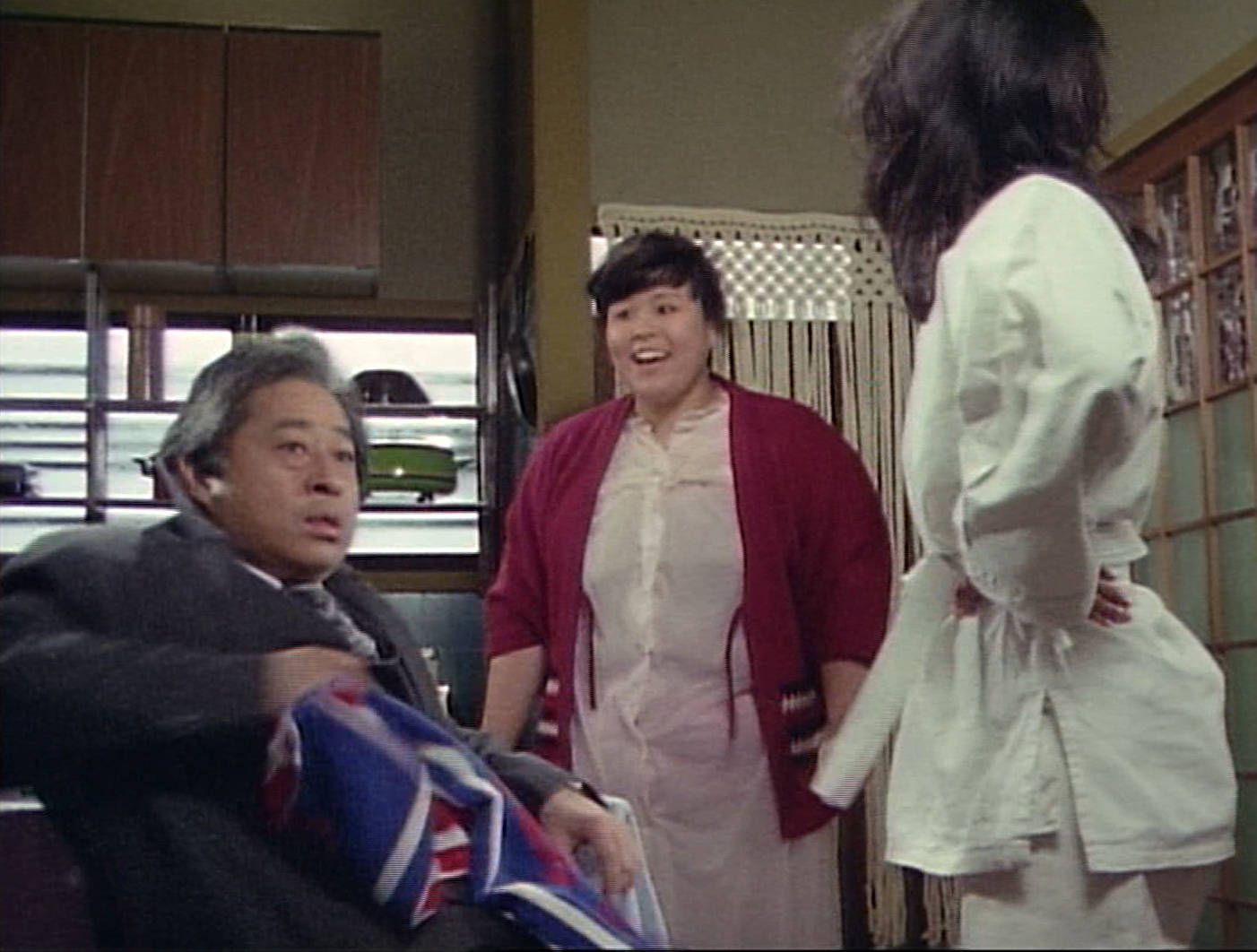 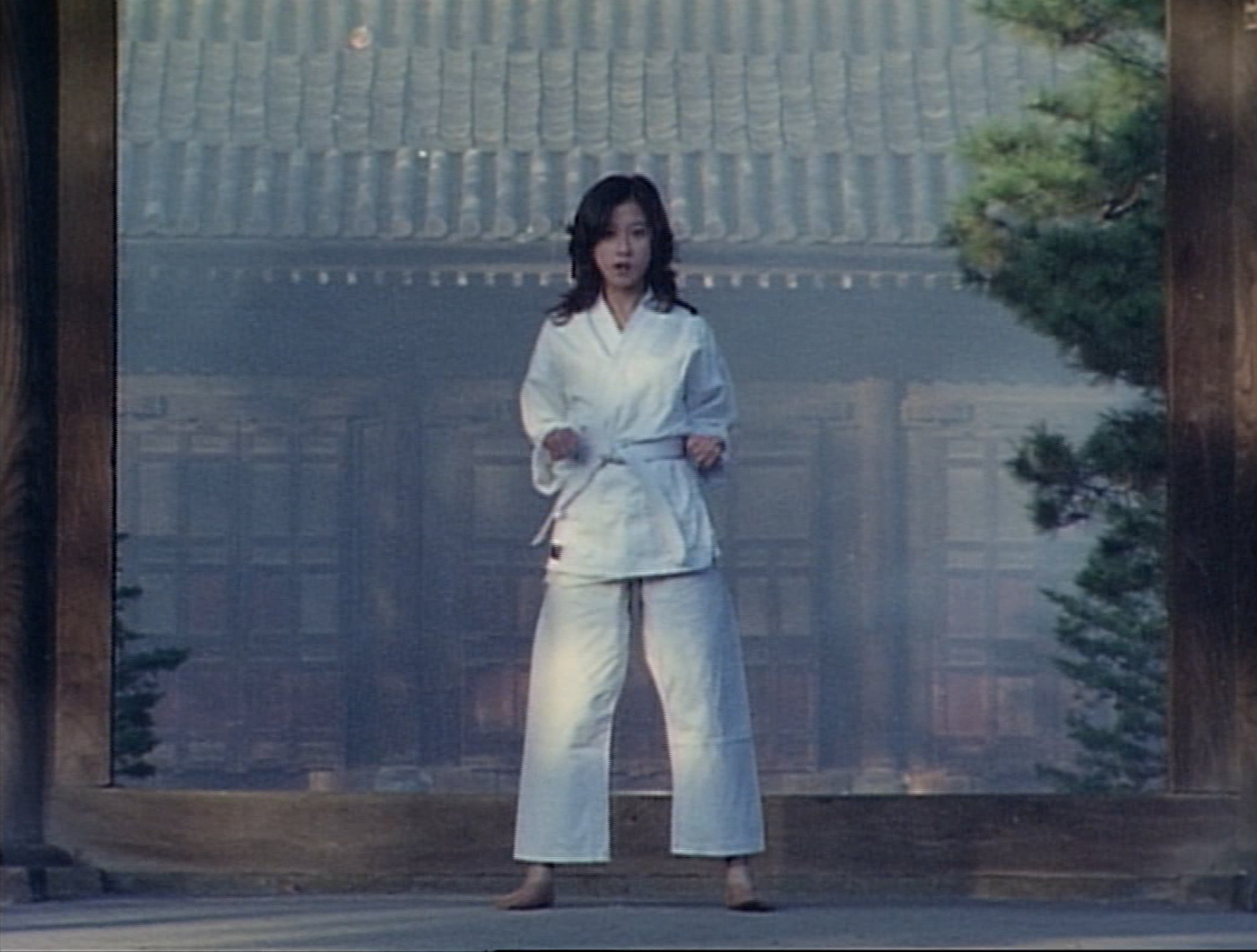 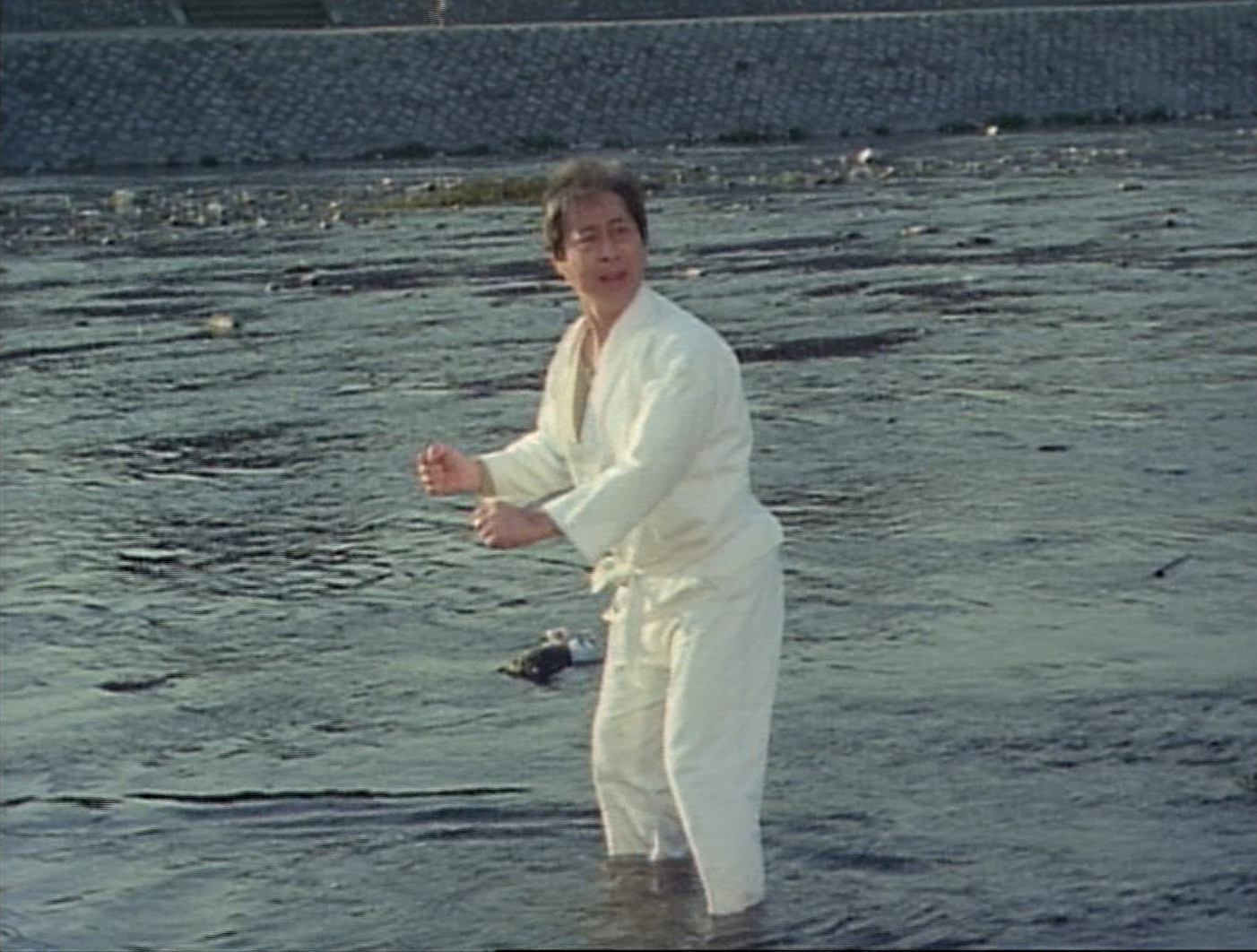 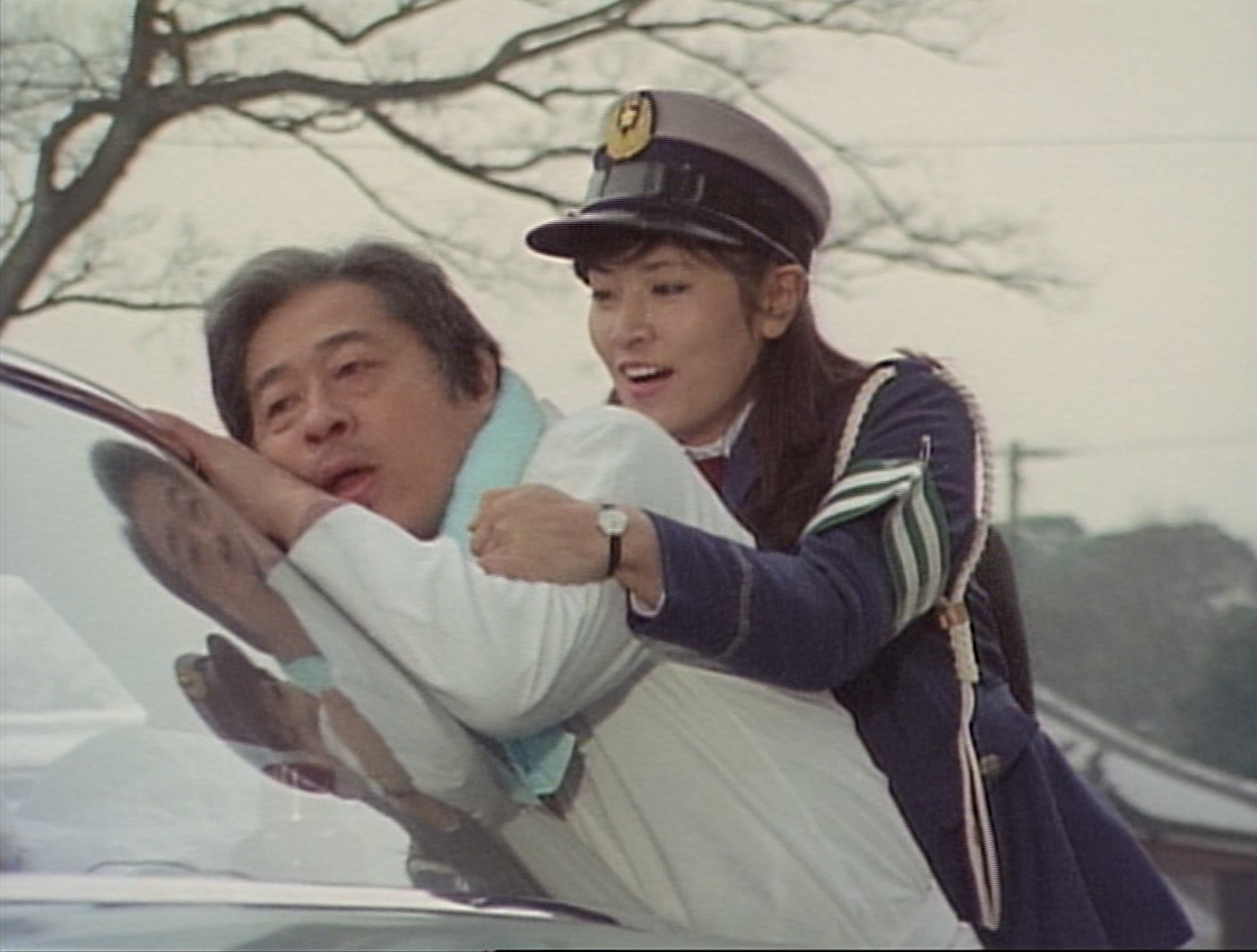 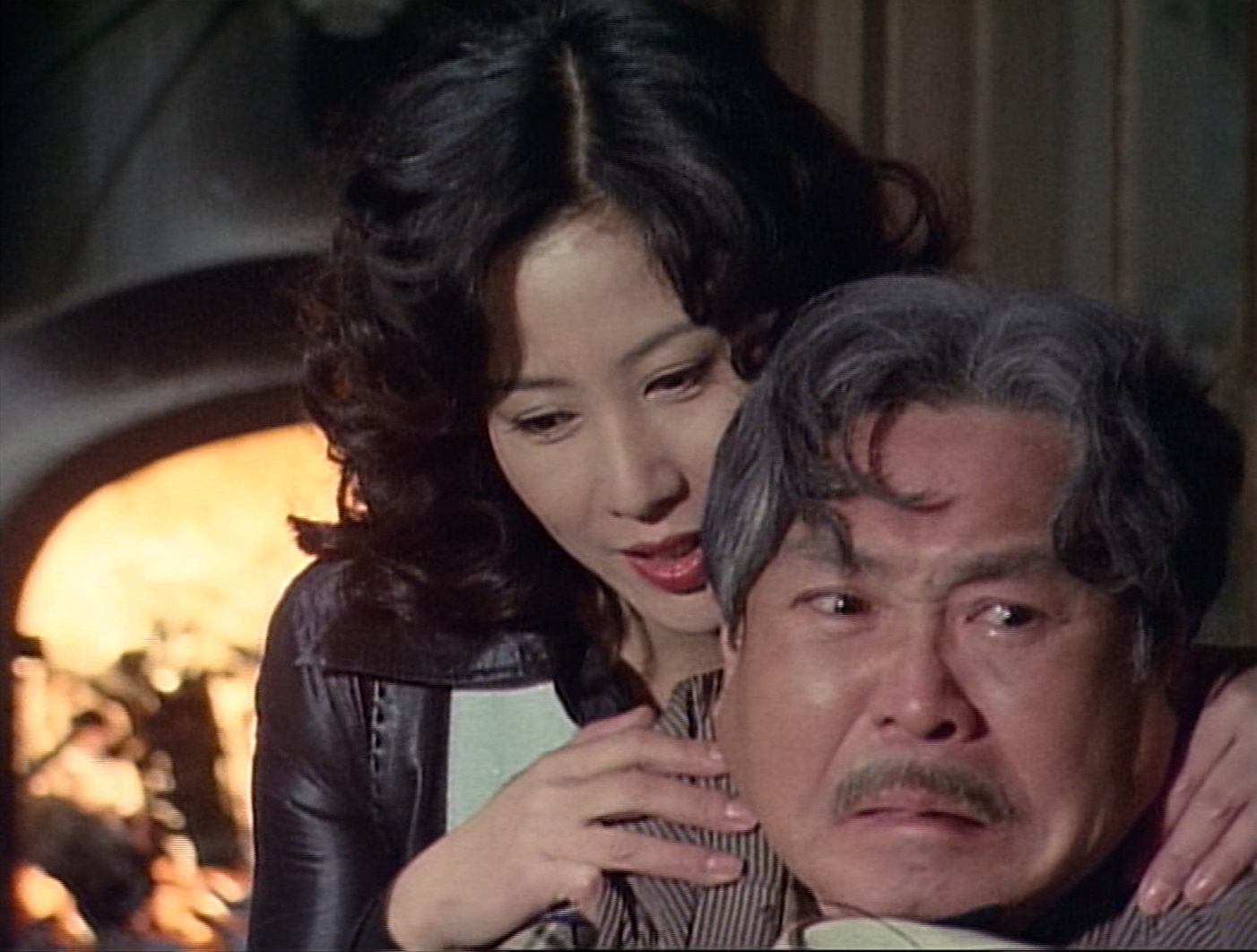 This is Miyashita as well 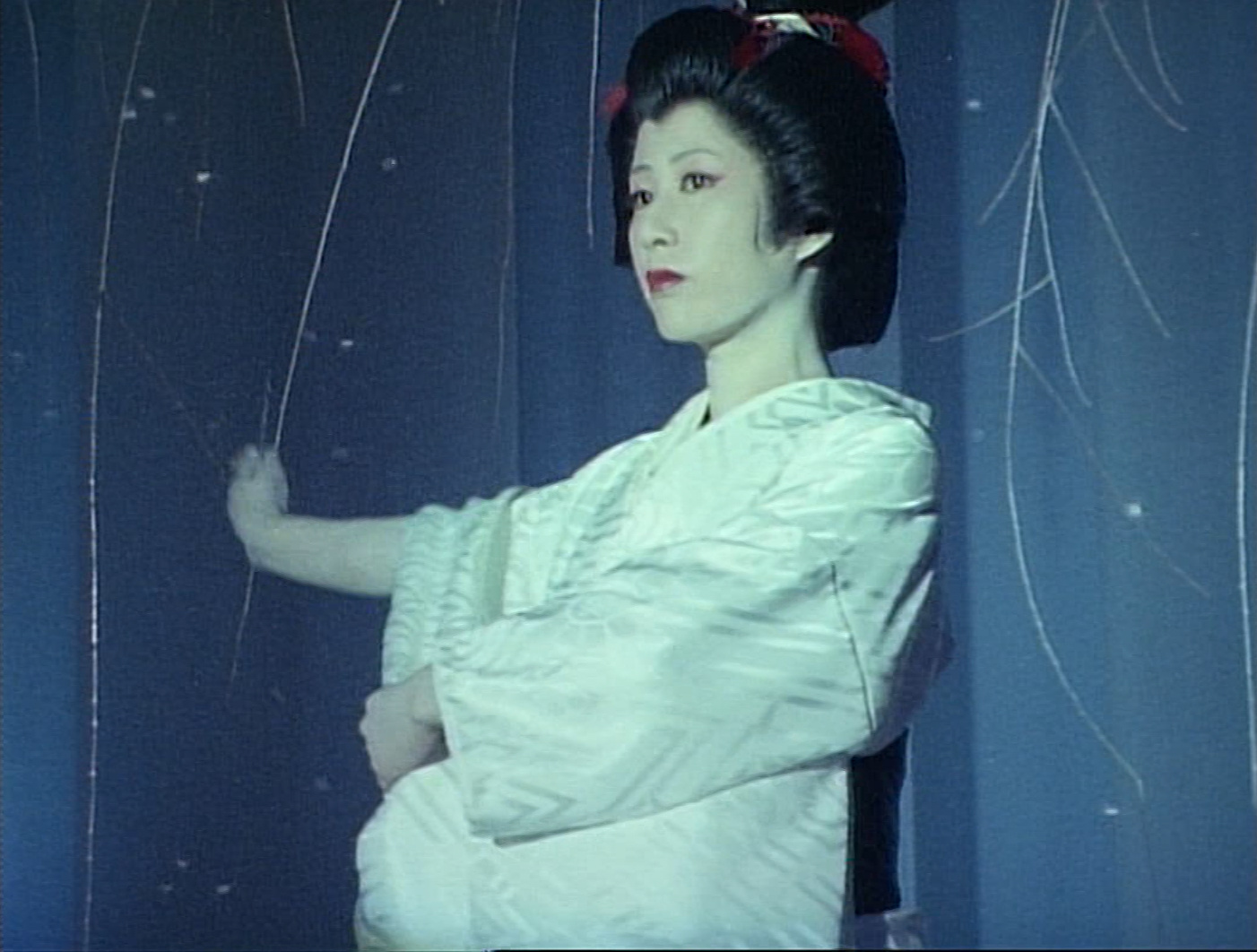 A standard ninkyo film with honourable yakuza Koji Tsurura going against merciless, but not entirely rotten businessman gangster Tetsuro Tamba. There are too many talking heads scenes and a storyline that isn’t awfully interesting, but also solid filmmaking and drama that sneaks into the film almost unnoticed. Tamba is always interesting, and the bloody final sword duel against him is quite powerful. There’s also some old fashioned charm stemming from an extensive use of songs, which shouldn’t necessarily be surprising since Toei’s prominent enka singer actors Hideo Murata and Saburo Kitajima are both in the film.

This was the 2nd movie in the Kanto series, one of Toei’s early ninkyo series. Shigehiro Ozawa wrote and directed them all five of them. While I have not seen the others, it appears Tsuruta plays the same character only in the first two, and different characters in the rest.

and a badass still 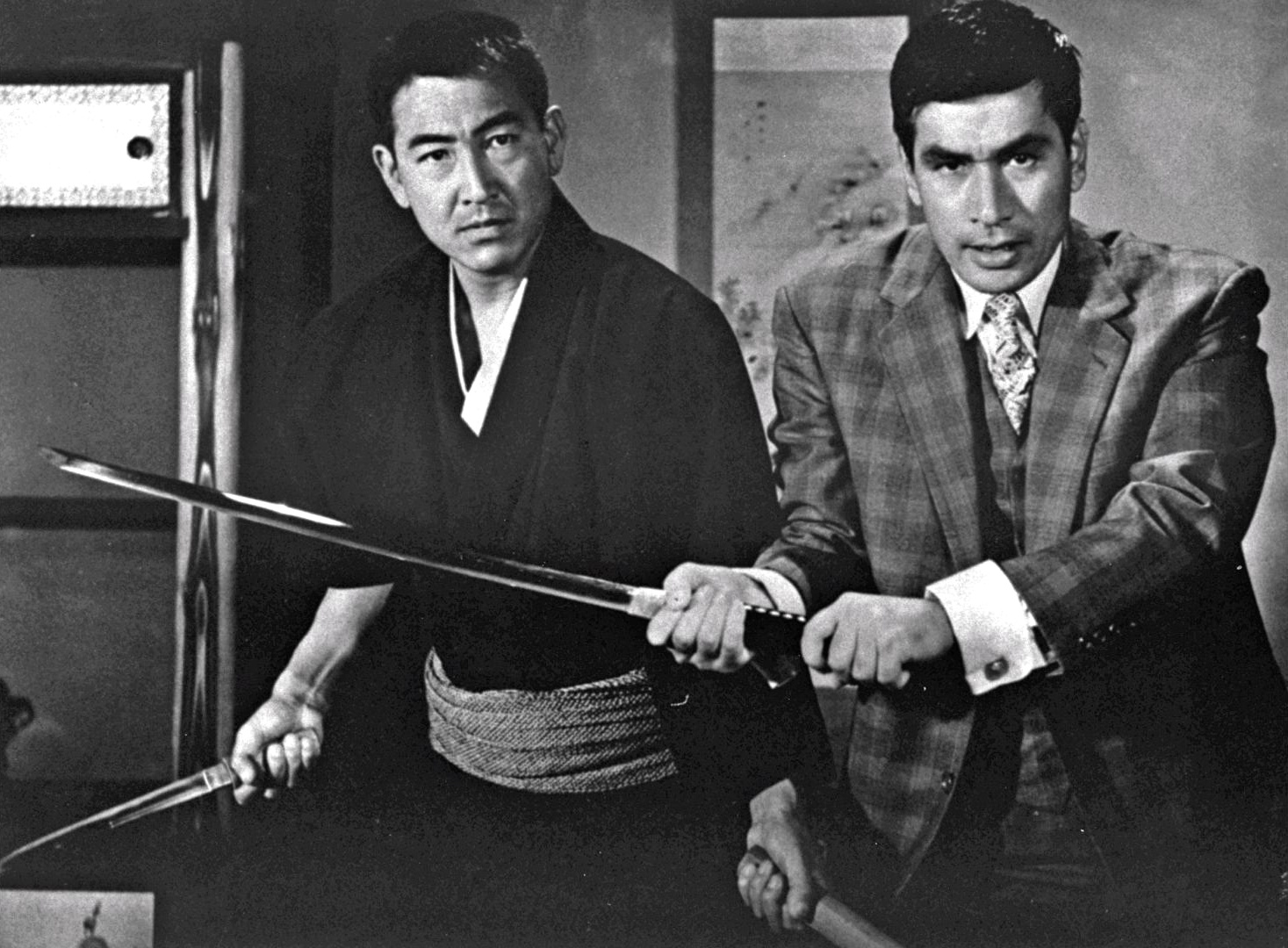 A standard ninkyo film elevated by star Nijiko Kiyokawa. At 57 years of age, she wasn’t quite the cutie idol Toei put in their other movies. An actress since the early 1930s, she was probably best known to Toei yakuza audiences as the battle axe wife in the Tomisaburo Wakayama’s Gokudo series. This film is somewhat a derivative, with mostly the same cast (Kiyokawa, Shingo Yamashiro, Bunta Sugawara, Minoru Oki, Bin Amatsu) and a similar feel. Kiyokawa gets her gang into female wrestling, quarrels with delinquent girls (Hiroko Minami, Masumi Tachibana, and Yumiko Katayama with some amazing fashion), and shoots a bad guy in the eye! Mediocre Takashi Harada helms it with professionalism albeit without originality. But it is lovely Toei gave Kiyokawa a film of her own at this point of her career…. even if they couldn’t refuse a bunch of (non)sex appeal jokes. 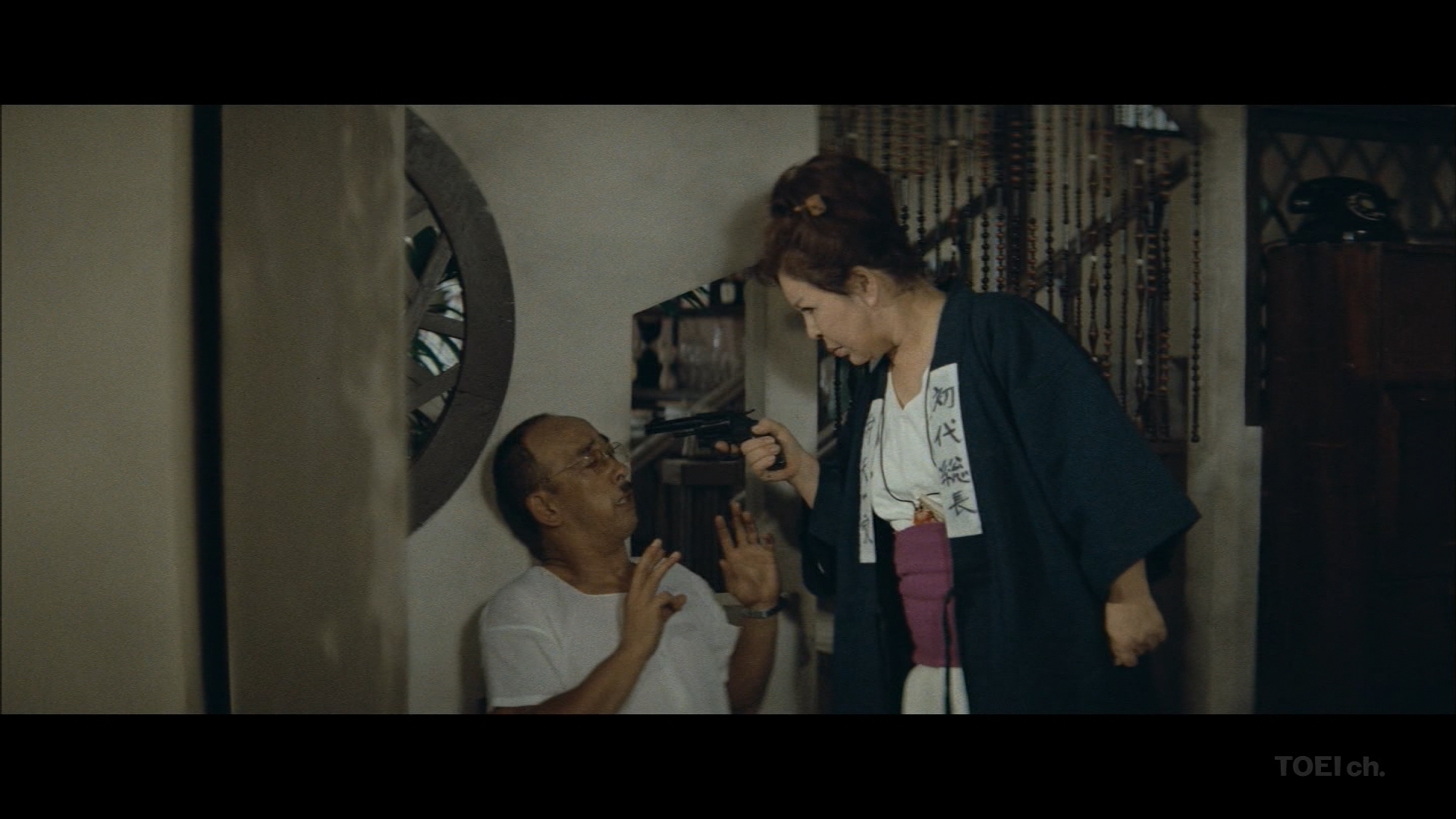 Part 2 in the Song of the Night series, this time based on a Shinichi Mori song (he’s also a supporting actor in the film). Umemiya works for a hostess club that hires Nogawa, a woman who needs money for her husband who is waiting at home. Nobuo Kaneko plays two roles, and they are both rich pervert geezers! Spectacular production design and use of colours aside, this is pretty unmoving at first, but gains momentum from halfway on and ends up a dramatic tale of manipulation and love losing out to greed. Umemiya does his usual pimp / hustler / seducer role, which by 1968 was turning into a one man genre of its own, ala Liam Neeson revenge films. Norifumi Suzuki wrote in his book that the sexy “seducer films” with Umemiya and others were in high demand at Toei, because they made ideal B-features in Toei’s double bill system, where an overly masculine ninkyo yakuza film (void of any sexual themes) was the main audience draw. But the sexy films remained notably tame most of the time, and like this one, were often void of any graphic nudity (Mako Midori’s sex melodramas tended to be more daring and twisted, however).

Part 10, with Yutaka Nakajima as the heroine. Umemiya does not appear in this one. The base is an Aki Yashiro song written into a screenplay by Masashige Narusawa. Nakajima is a naïve good girl who helps young yakuza punk (Tani) who bumps into her with a gun in his hand and a bullet in his arm. She's working in her mom's hostess bar (one of the girls is played by Yumiko Katayama) populated by horny customers and the mom's boyfriend who also has his eye on Nakajima. Before the tale is over, poor Nakajima's been bullied, harassed and raped (more than once). The more subtle tones of Narusawa's better work are nowhere to be found here, but Nikkatsu Action refugee Buichi Saito helms the film with swift pace (it's only 73 min), plentiful nudity by everyone except Nakajima, and the series' trademark top notch cinematography and production design. An entertaining B-film, nothing more, nothing less (the A-film, btw, was Takakura's Third Generation Yamaguchi Gang, Toei's no.1 film of 1973).

Oh and here is a brief general intro to the Song of the Night series. I originally wrote it when I had seen only 8 of the films, so I've updated it slightly.

I finished watching the Song of the Night (夜の歌謡シリーズ) (1967-1974) series. The films were loosely based on hit songs about young adults, the men and women of the night. Tatsuo Umemiya was the series mainstay, appearing in almost every entry. However, he was sometimes not the lead but a supporting character giving the spotlight to Yumiko Nogawa, Junko Miyazono, or Yutaka Nakajima in the last three films. These films were programmer pictures that thrived in the B-film slot. Norifumi Suzuki mentioned in his book that there was a high demand for “sexy” and “feminine” films because they made ideal pairs for the masculine ninkyo yakuza films that were released as Toei’s A-films.

From the 11 films, the melancholic Song of the Night: Woman (夜の歌謡シリーズ おんな) (1969) is excellent, while the rest range from dull to good. Many of them capture the seedy night life districts of the 60s well, and some also do good job depicting the people spending their nights in those districts. Umemiya is usually some sort of pimp / playboy / hostess club manager, and Nogawa, Miyazono etc. either an emotionally doomed hostess or a ruthless get-rich-or-die-trying woman prioritizing money over love. Song of the Night: Nagasaki Blues (夜の歌謡シリーズ 長崎ブルース) (1968) is a particularly interesting as it has Hiroki Matsukata and Hayato Tani as two male hosts selling themselves for money. Some yakuza characters also appear, usually played by the likes of Fumio Watanabe.

Now, regarding what films belong to the series, this is where it gets complicated. Toei Video’s homepage once acknowledged Song of the Night: Even if I Die (夜の歌謡シリーズ 命かれても) (1968) as the 1st film in the “Song of the Night” series. However, the original Eiren summary calls it the 3rd film in the series. Toei’s own theatrical poster for “Woman” is consistent with Eiren, advertising it as the “8th film in the popular series” although it was only the 6th film with “Song of the Night” in the title.

The explanation is that the series actually started with Yanagase Blues (柳ヶ瀬ブルース) in 1967, but it wasn’t until the 3rd film that Toei started attaching the “Song of the Night” moniker into the title. Fast-forward 50 years and even Toei themselves don’ remember which movie started the series.

Fast-forward a few more years to 2020, and Toei Channel starts broadcasting the whole series on TV, this time calling “Yanagase”the 1st film in the series.

More than anything, this is a good example of how marketing worked like in the 60/70s Japan. Selling films was the 1st, 2nd and 3rd priority, consistency was the 57th. Movies could be attached into a successful series posthumously, or sequels could be advertised as openings of a new series if they saw commercial potential there. The 60s Teruo Ishii ero films are a perfect example.

Part 1: Yanagase Blues. The poster actually says "From 9 to 5 Night Series". No "Song" to be found. 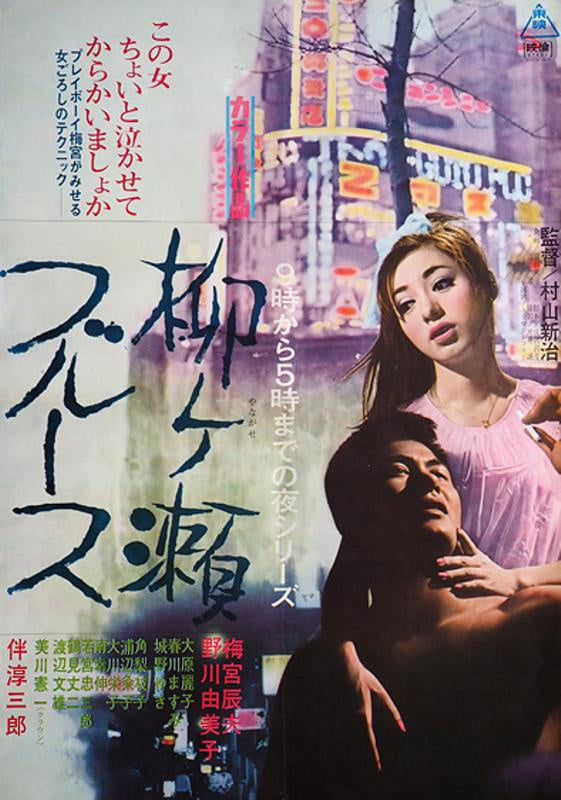 Part 6: Song of the Night: Harbor:Town Blues. The poster now says "popular series part 6" even though it was only the 4th film with "Song" in the title. 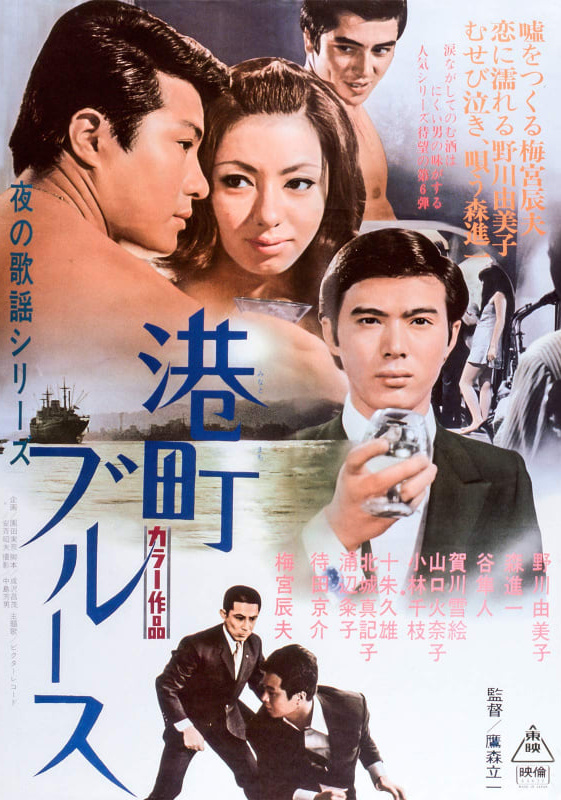 Part 8: Song of the Night: Woman. The poster also says "part 8 in the popular series". 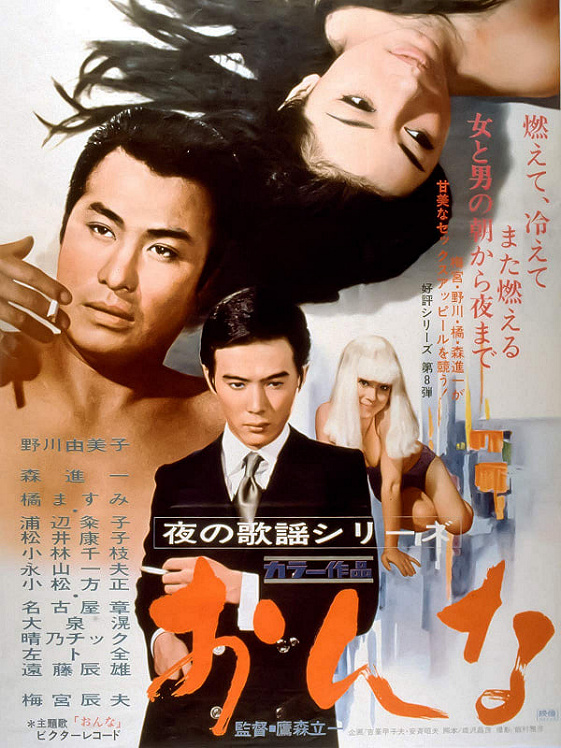 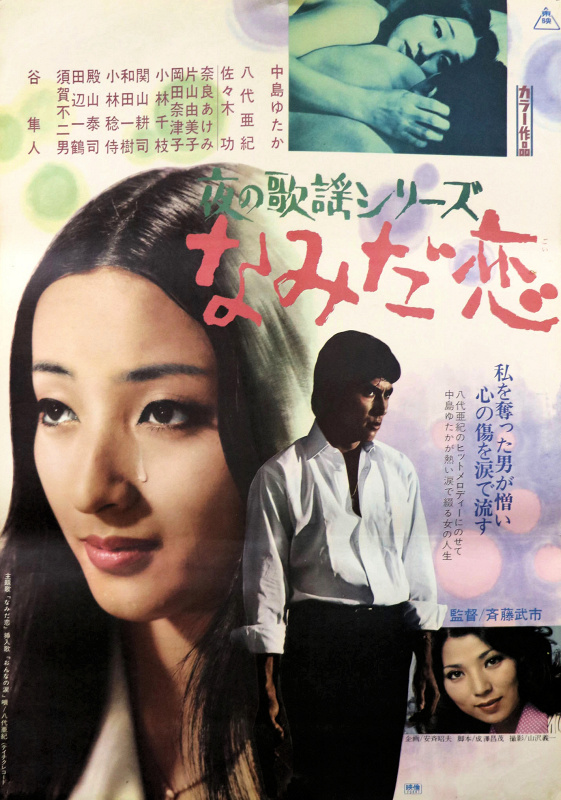 I'm not gonna pretend I understood half of this, but since the film doesn't even have an IMDb page, I'll try to provide a basic intro / review and screencaps.

An extremely dated sci-fi / computer thriller scripted by young Yuji Sakamoto (he would later become a successful TV drama writer). The setting is post apocalyptic future where a “computer nurse” (idol Keiko Hirata) stationed in an industrial complex is trying to keep a computer system free of viruses. She will have to engage in battle against viruses like Amiga 6000, a vicious online attacker hacking into her soul, and faceless cyborgs! She also strips down to black bra and panties for no apparent reason. Shot on video, made for TV, running less than an hour, and full of extremely primitive CGI graphics used throughout the film, it’s a film that sounds more fun than it is. It may offer a few nostalgic laughs for computer nerds, but little else. The musical score sounds like it was composed by 80s AI, too. For better similar films, see Noboru Tanaka’s computer thriller Monster Woman '88 (1988), Masato Harada’s industrial mecha sci-fi Gunhed (1989) and of course Ghost in the Shell (1994), which cover most of what’s on display here. 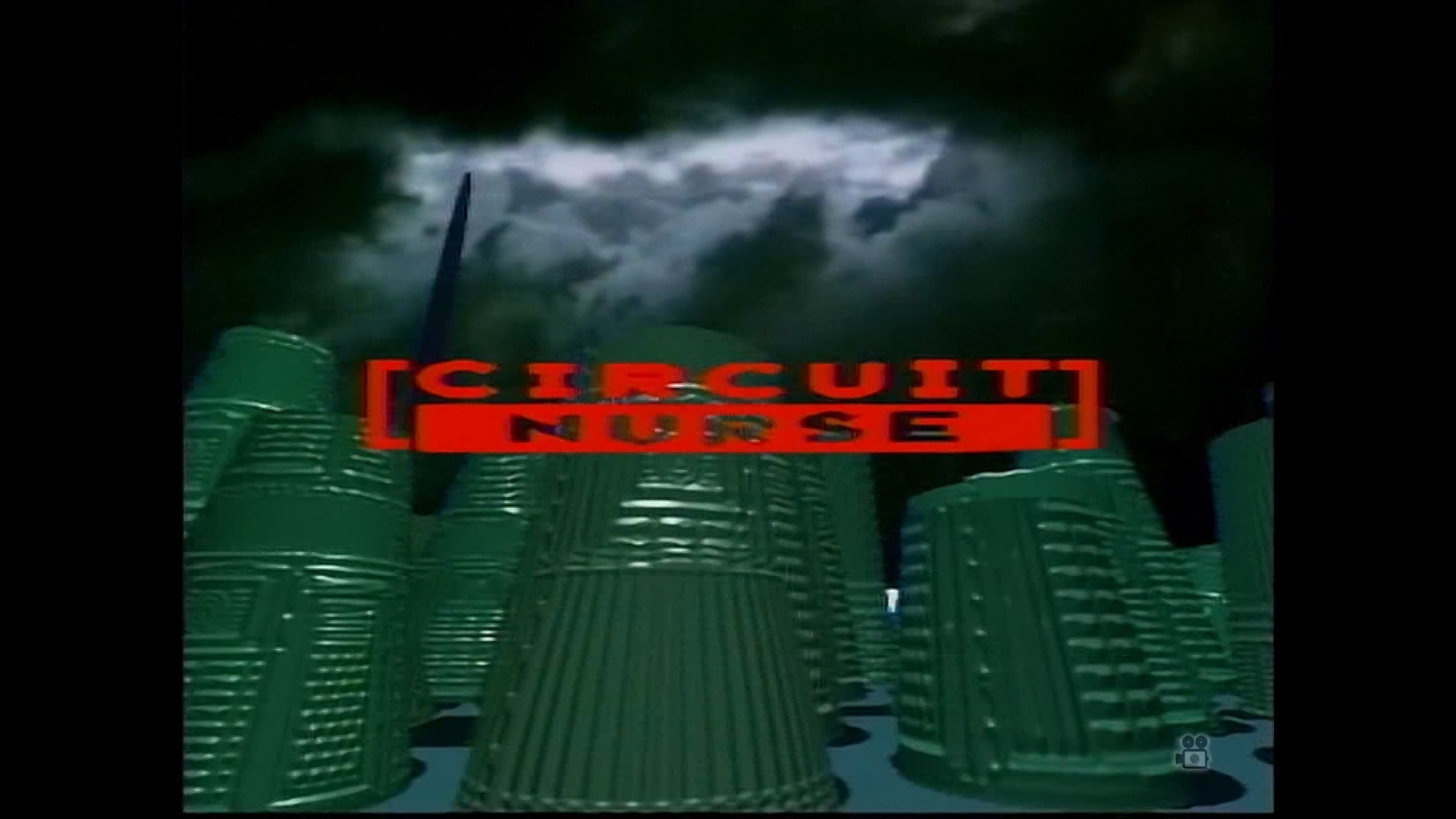 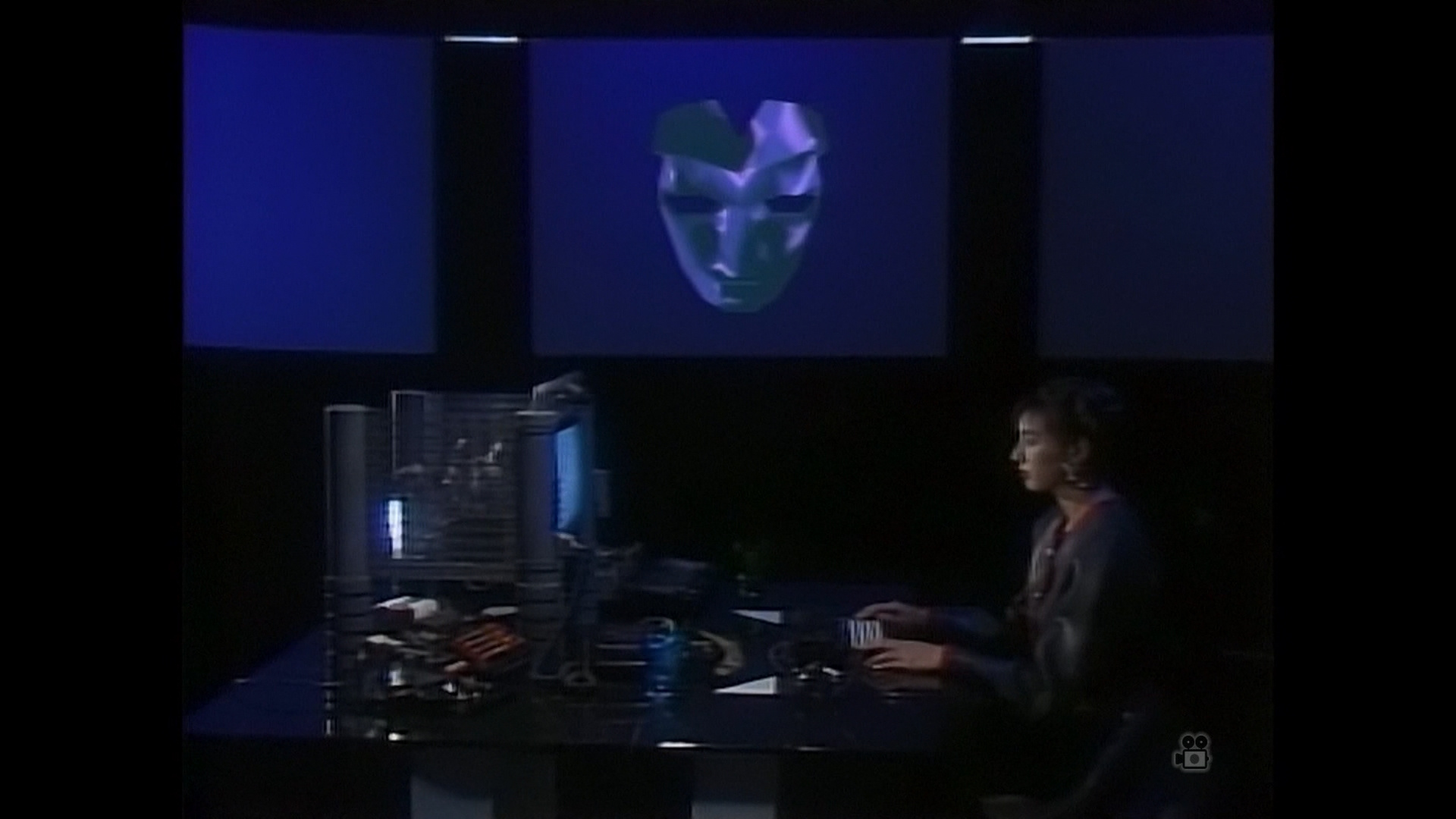 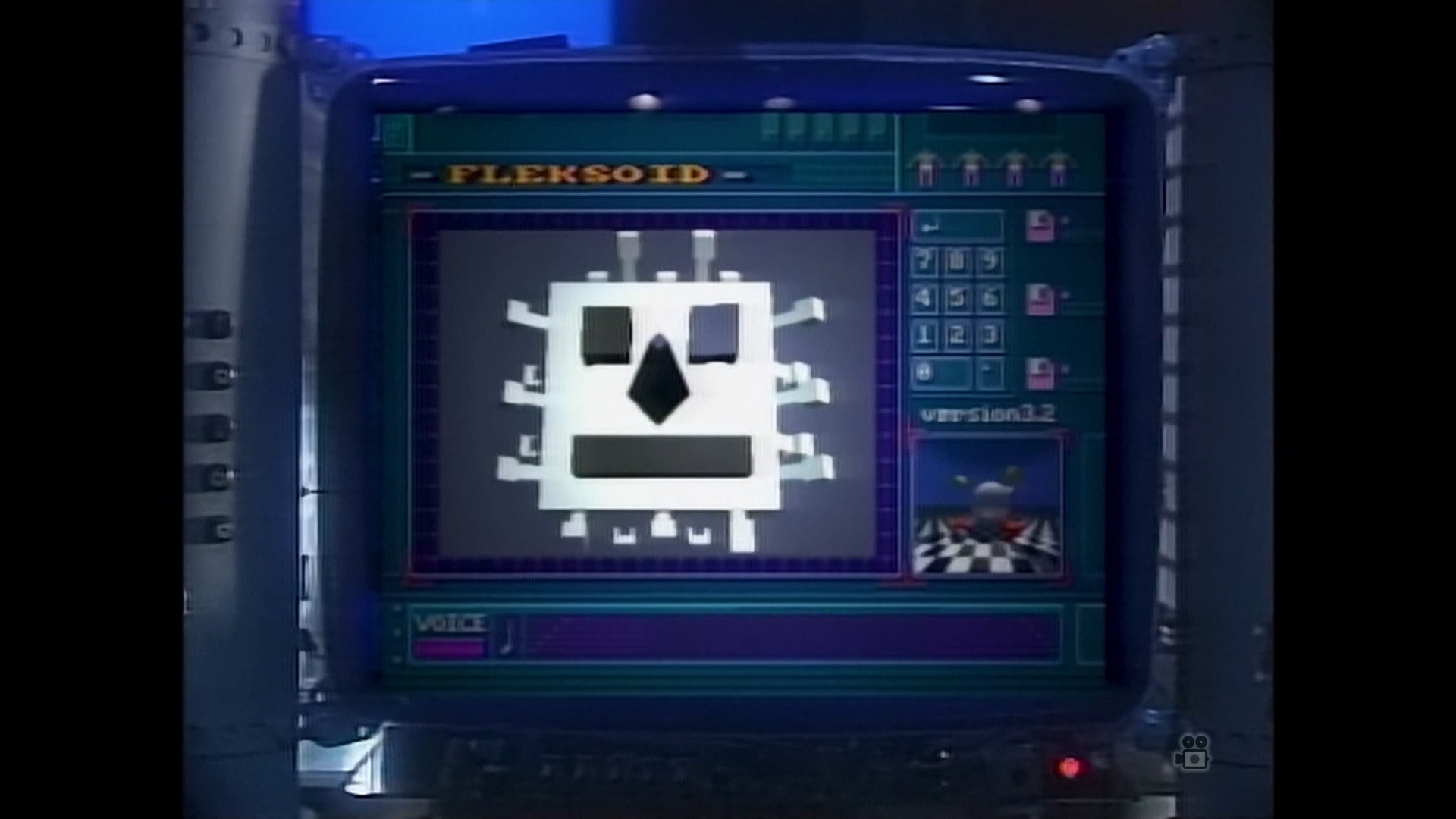 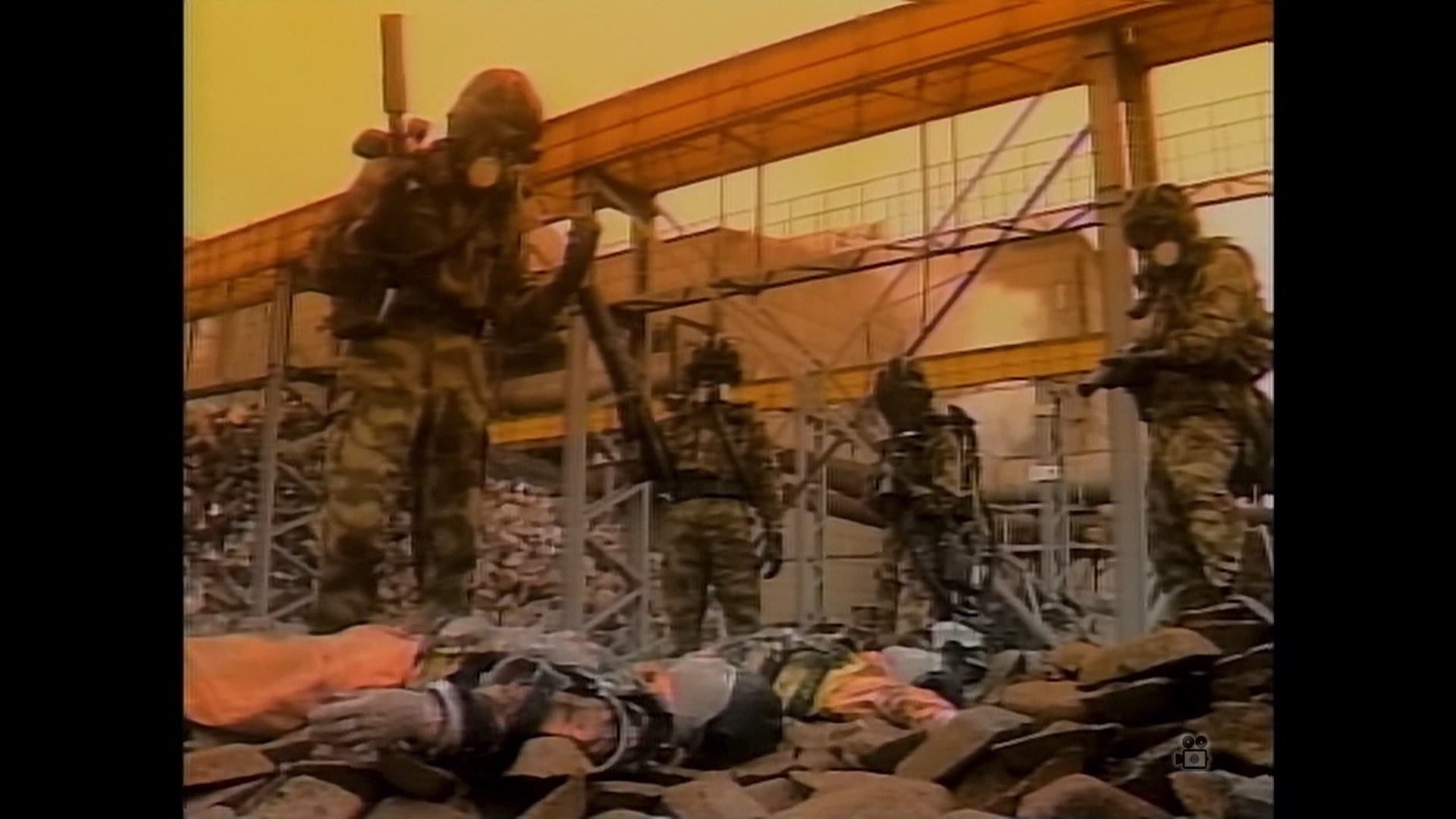 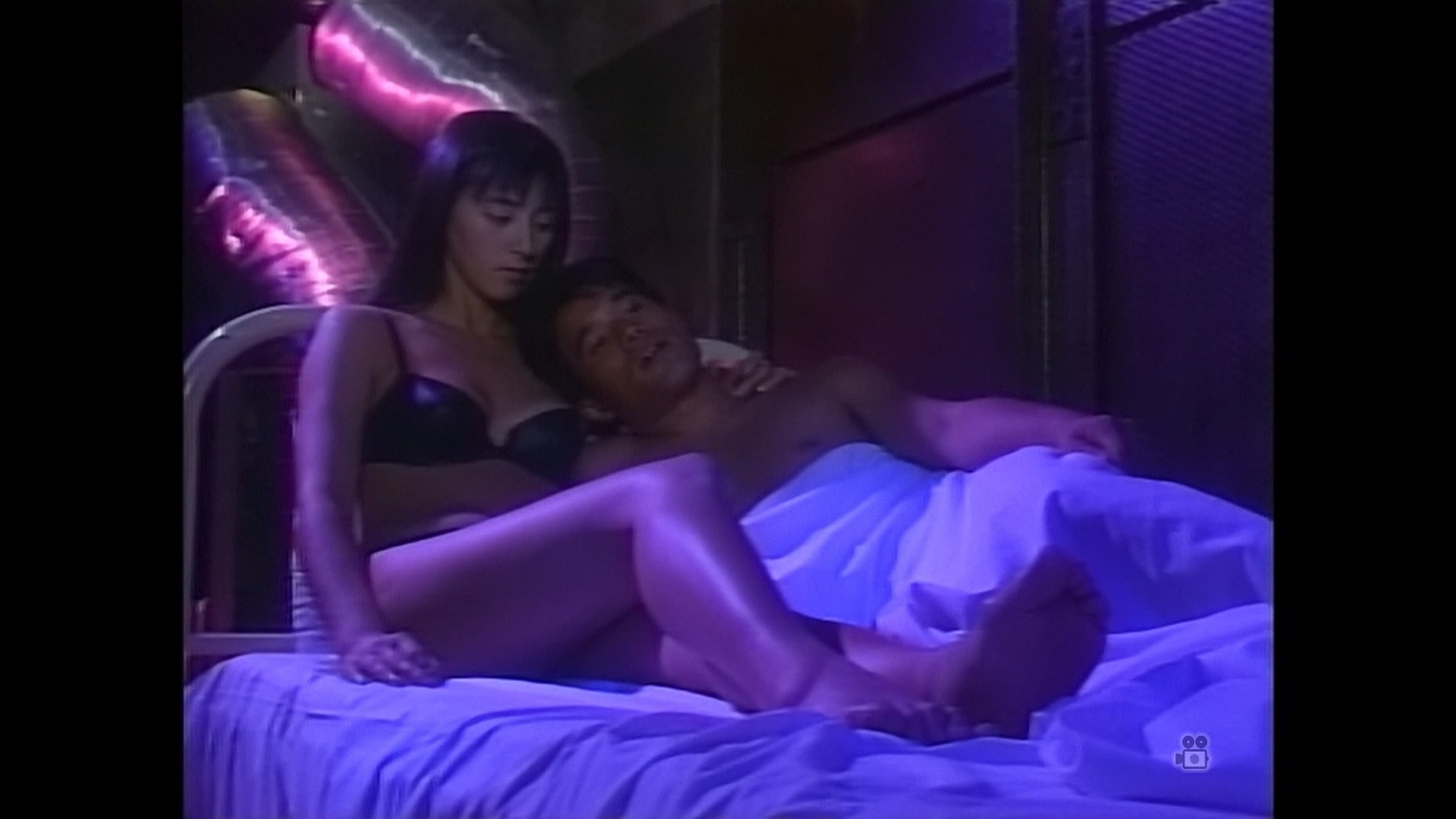 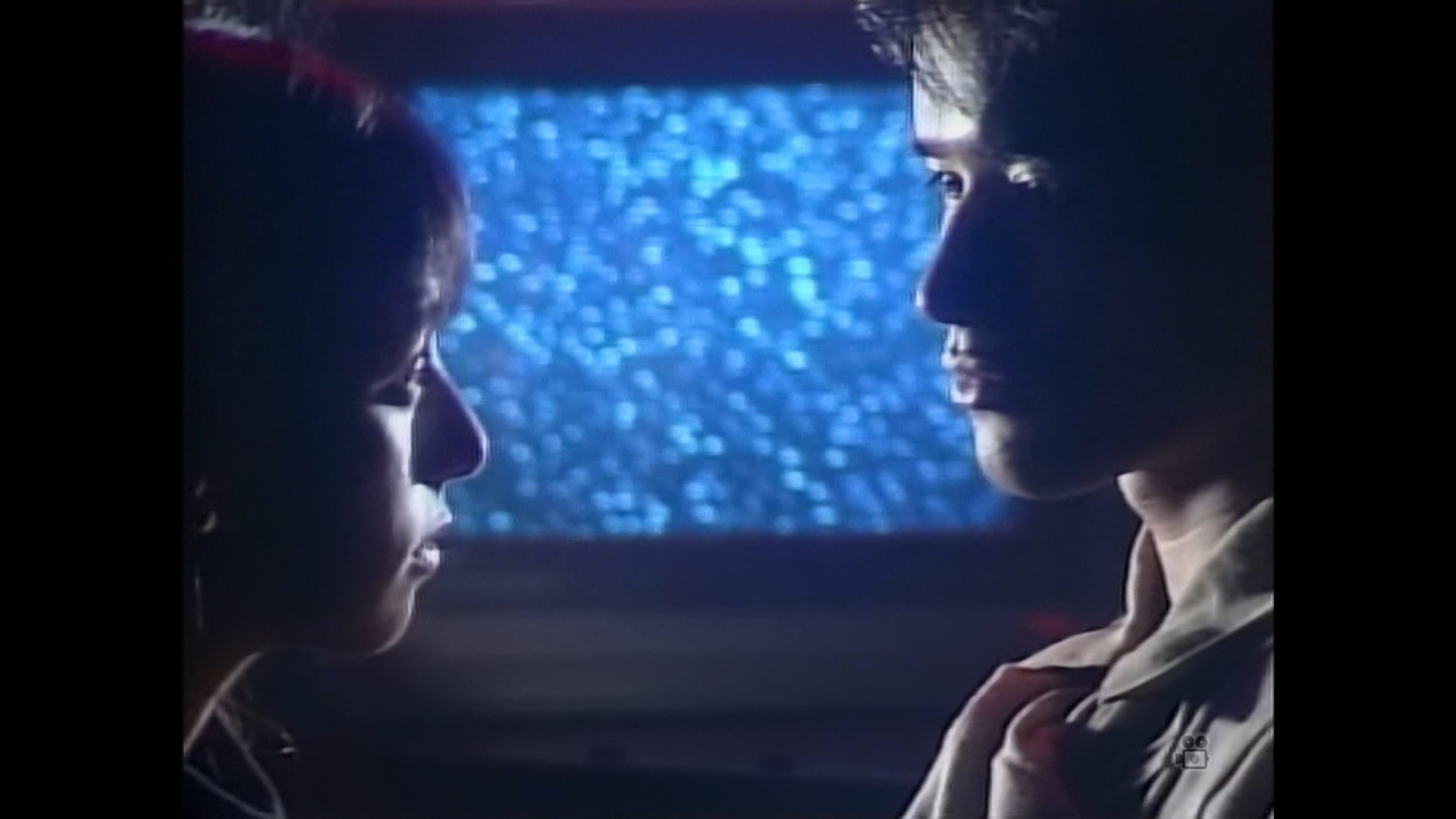 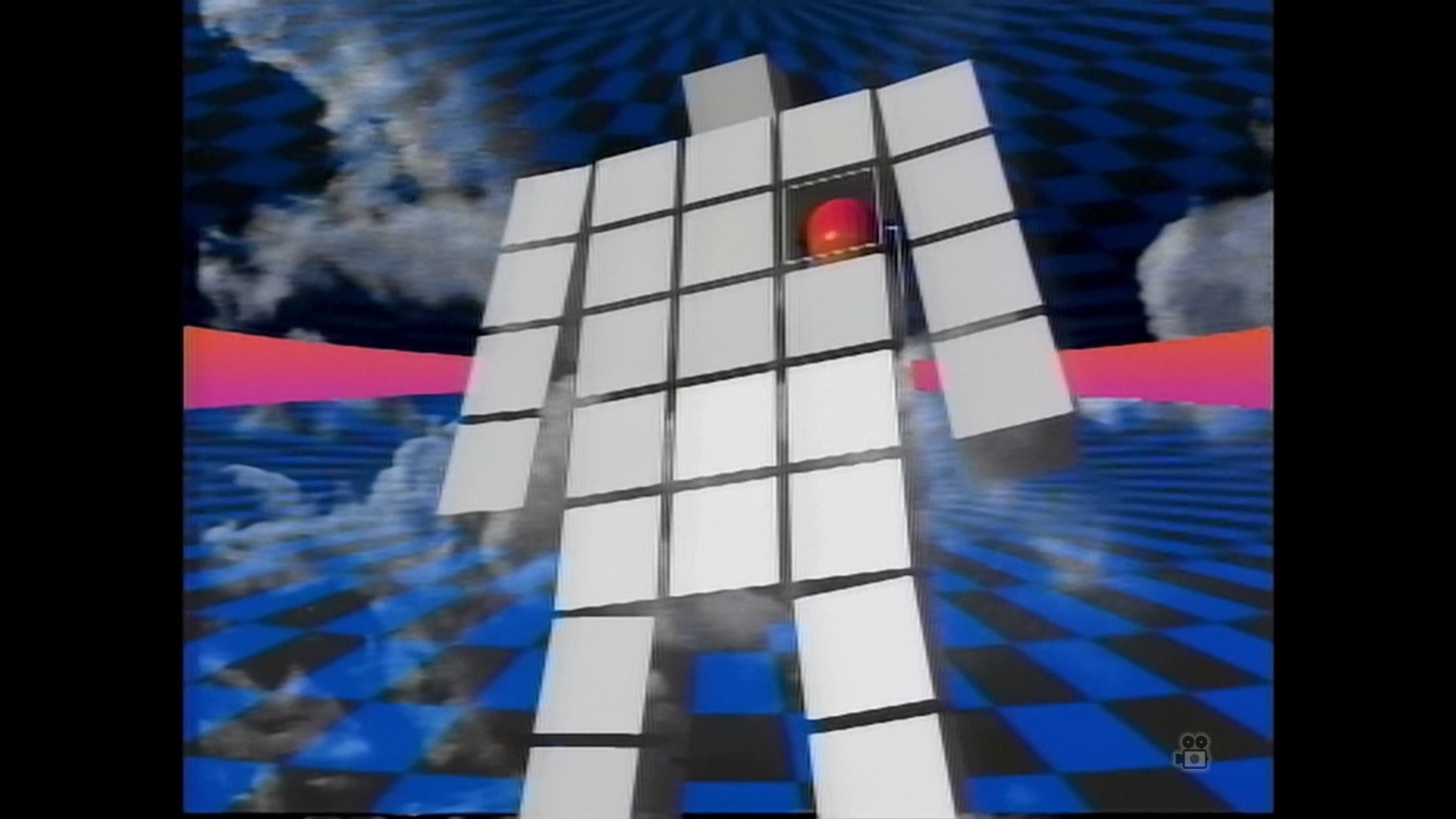 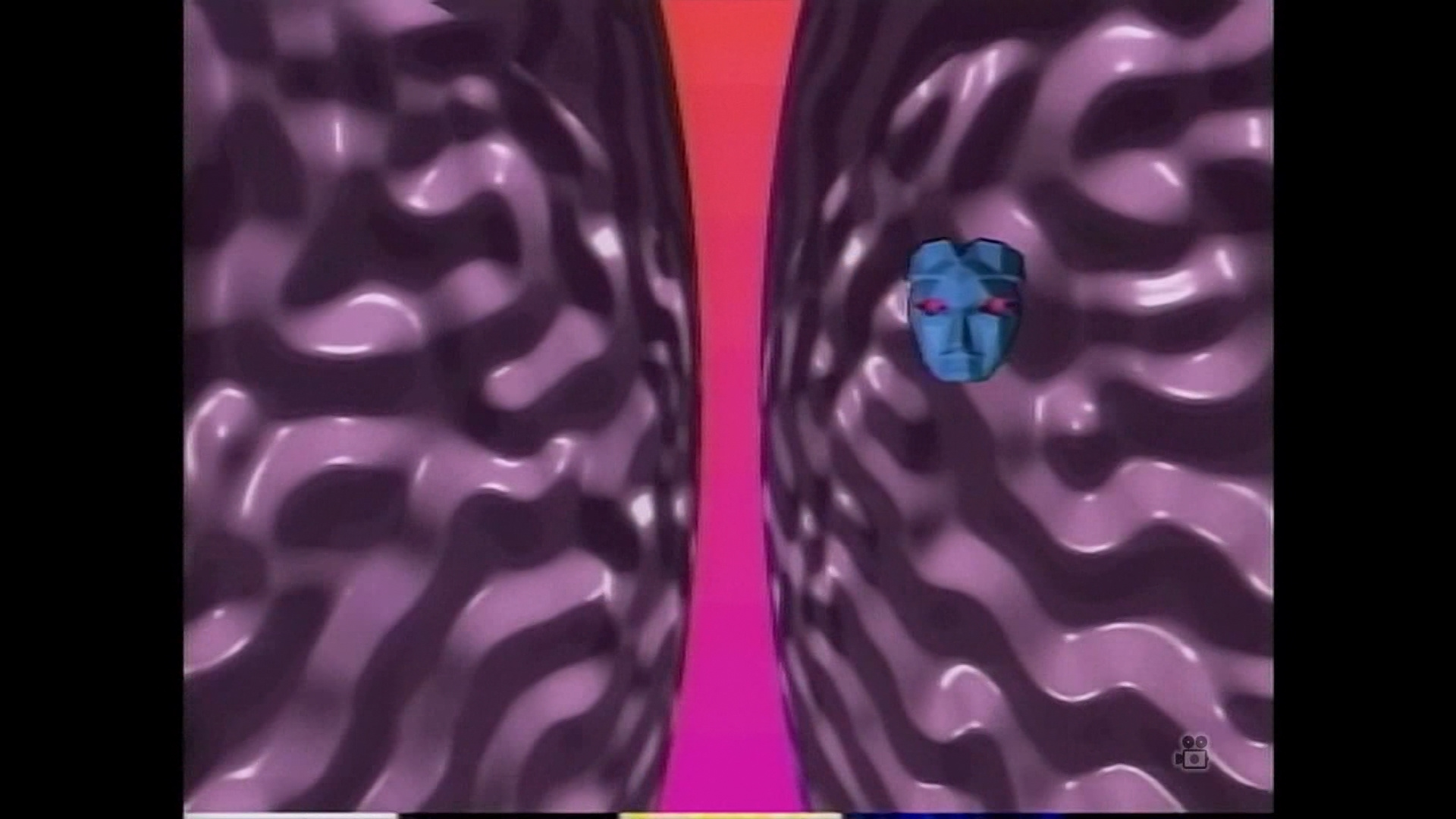