Lately Sono's films have been turning out worse than they sound like. And this even sound bad.
Top

The film is about two hardcore Japanese rappers, HIRO and ZEEBRA, who have to deliver a teddy bear to an abandoned hospital in order to save one of their girlfriends as part of a "game" that got out of hand. I have no idea what Ishii was thinking either.
Top

Kind of looks like 'Why Don't You Play In Hell pt.2: Why Don't You Rap J-pop In Hell With a Bunch of Famous Japanese Actors.'
Shôta Sometani as Mc, too! That dude is hot! Sion Sono is my favorite hipster.
Top

I lost count how many cheap CGI shots there were...
Top

I’ll be damned. Tokyo Tribe was actually quite good.

It’s got an insane drive from first frame to the (second) last scene. The dystopian sets are frankly amazing, and the camerawork is superb. The film opens with two tracking shots, both several minutes long, and you get more similar stuff throughout the film.

Action is also good, especially martial arts and wire-fu stuff modelled after early 1990’s Hong Kong kung fu films. Nana Seino is ok in action, though she repeats her moves. There are some other performers who provide a couple of mindblowing moments.

And my God! Nana Seino went topless! I’m in heaven! Panty shot galore, too. She’s almost as good as Hikari Mitsushima in Love Exposure and Fumi Nikaido in Why Don’t You Play in Hell.

But then, the film does have some of the expected flaws. The utterly idiotic CGI blood is there again, though thankfully only in a few scenes. Ridiculous CGI tank, too. And the film doesn’t really have a main character or anyone to care for, which takes away any emotional punch from the rather underwhelming ending.

I don’t give a shit about rap music, but it more or less works here. Most of the dialogue is actually rap, with some scenes/performers better than the others. Sometani seems a bit out of place here, though he's not too bad.

So, no, it’s nowhere near Sono’s masterpieces from the previous decade, but it is his best since Cold Fish. A pretty fun ride, and a thousand times better than its trailers. And it’s got Riki Takeuchi over-acting worse (better) than ever before!

Not that the film is THAT great, but I went to see it one more time. I figured out Nana Seino’s breasts should be worth the ticket price anyway.

Still hated the idiotic CGI, and there are some other problems like Shoko Nakagawa whose only purpose is to make fun of stupid Japanese media who thought the yellow track suit in Why Don’t You Play in Hell was a Kill Bill reference, but I must say the rest of the film is damn badass. Ryohei Suzuki especially is on fire, and Nana Seino is great!

A bit more about the action. Despite the Crows Zero –like premise, most of the action is influenced by Hong Kong and Thai flicks. First we’ve got the German born Taekwondo giant Bernard Ackah and the slick Japanese-American dancer-martial artist Joey Beni as a sort of hit team. Ackah relies on force while Beni moves like a lightning and runs on people’s shoulders. Some wire-fu as well.

The second duo is Nana Seino and the 16 year old girl Makoto Sakaguchi (though she plays a boy in the film). Sakaguchi an acrobat and martial artists working for the action team Worsal, who designed the action scenes and are now working on Tak Sakaguchi’s comeback film Re-Born. Her stuff has more Thai influence in the way she moves around and runs from the enemies. Nana Seino is a model turned actress, and against that background, she’s actually pretty good in the action. Nice kicks and all, though her repertoire is limited. As an actress, however, she’s really good in the film!

Finally, we’ve got the lead characters played by Ryohei Suzuki and Young Dais. Their fight is more of the Crows Zero style, though it’s a katana vs. baseball bat rather than fist fight. They’re all right, but obviously they’re not, nor are they supposed to be, professional martial artists. This is the “two pumped up men beating the shit out of each other” part, although it doesn’t quite compare to Miike’s stuff.

Oh, and in case you were wondering, the female cop in the opening scene is Kokone Sasaki from Takashi Ishii’s Hello My Dolly Girlfriend.

Some pictures from the theatre: I'm confused by the presence of cheap CGI effects. From all the screenshots it looks like the budget must have been GIGANTIC. Did they spend it all on the sets and costums?
Top

Guro Taku wrote:I'm confused by the presence of cheap CGI effects. From all the screenshots it looks like the budget must have been GIGANTIC. Did they spend it all on the sets and costums?

I'm as confused as you are.

Yes, they put an enormous amount of care and money on the sets, and then we have these $5 dollar CGI effects here and there. I think Sono somehow believes that people like shitty CGI or won't be able to tell the difference. Well, most people praising Sono's recent films really don't seem to care.

Thankfully the number of scenes with CGI is quite limited. I can pretty much tell all the (notable) instances from memory (no major spoilers)
- CG-generated Shibuya 109 building in the background of one scene *
- Riki Takeuchi stabbing and cutting a man's ear off (approx. 15 sec) *
- Ryohei Suzuki killing half dozen men with katata (1 minute) ***
- Ridiculous 30 second scene with CGI tank in Shibuya ***
- Ryohei Suzuki killing one man with guns, and then a few more with katana (approx 30 sec) ***
- Takeuchi firing CGI bullets with his minigun (10 sec) **
- Takeuchi with minigun again (10 sec) **
- People drawn into and killed by giant CGI propeller (1 minute in total) ***

* Can be ignored more or less
** Distracting
*** Looks like shit

The good news is that most of the film is free from CGI, including 80% of the action scenes because they are mostly hand to hand fighting. In Why Don't You Play in Hell the shitty CGI came at the worst possible moment: during the climax. Here the CGI is a bit easier to ignore and you can try to concentrate on the rest of the film which is quite good.
Top

Ok, so I went to see the film for a third time, and I swear it wasn't (only) because of Nana Seino's breasts

I'm finally starting to lean towards a 4/5 rating for the film. I'm hesitant because the idiotic CGI crap is just impossible to accept, but damn if the film isn't just so much fun whenever there's no CGI on screen. And this comes from someone who was certain the film was going to suck based on the trailers and Sono's recent track record.

I could easily watch the film for the 4th time just for the opening tracking shot, amazing set design, and Ryohei Suzuki who is on fire!

ok, so went to see Tokyo Tribe for the 4th time.

The film is incredibly re-watchable. The opening blows my mind every time...and the other fantastic tracking shot a bit later, and the badass introduction scene for Bernard Ackah and Joey Beni where they beat the shit out of people at the club. And simply can't get enough of the production design, which is like Escape from New York + The Warriors + something colorful as hell.

I can't wait for the BD to come out so that I can show people how the film really looks like rather than the shitty trailers...

... which will happen in January

Eureka is supposed to release the film in UK at some point as well.
Top

Finally bought the Japanese BD. Not quite the sharpest transfer, although I think some of caps are soft because the camera is in constant move (e.g. the first two caps are from the middle of a 4 minute tracking shot, and the 4th cap is from a different tracking shot). Two audio commentaries (Sono + Young Dais and Inoue + producers) and JP trailer on the first disc. Optional Japanese subs for the lyrics are also available. BD-25. 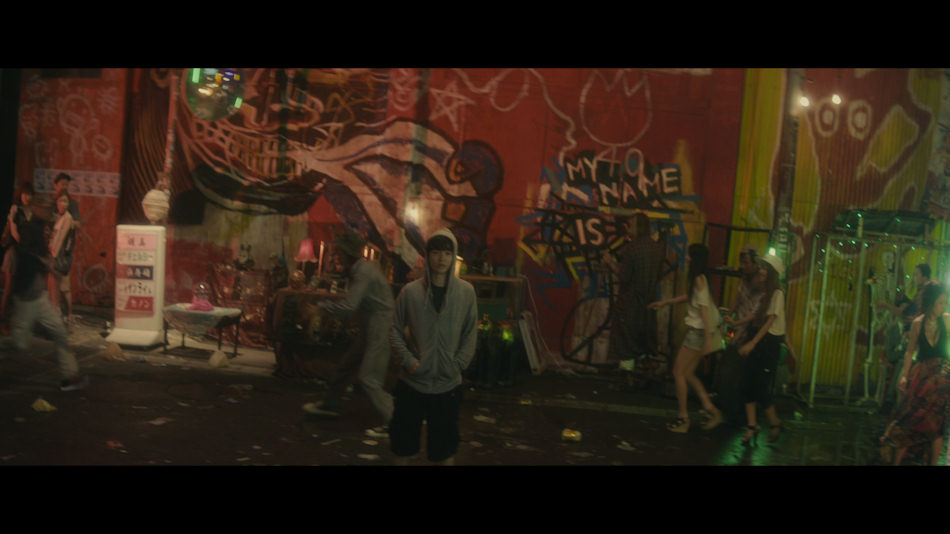 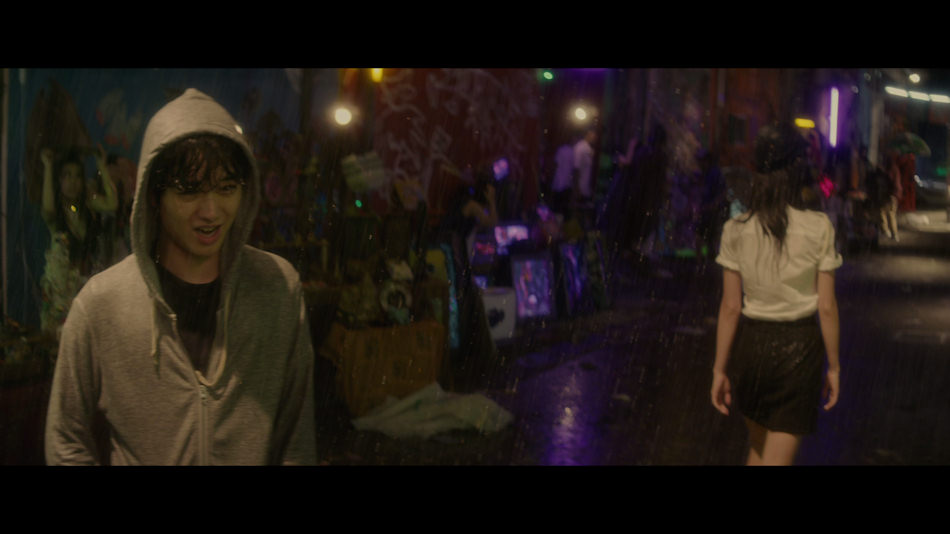 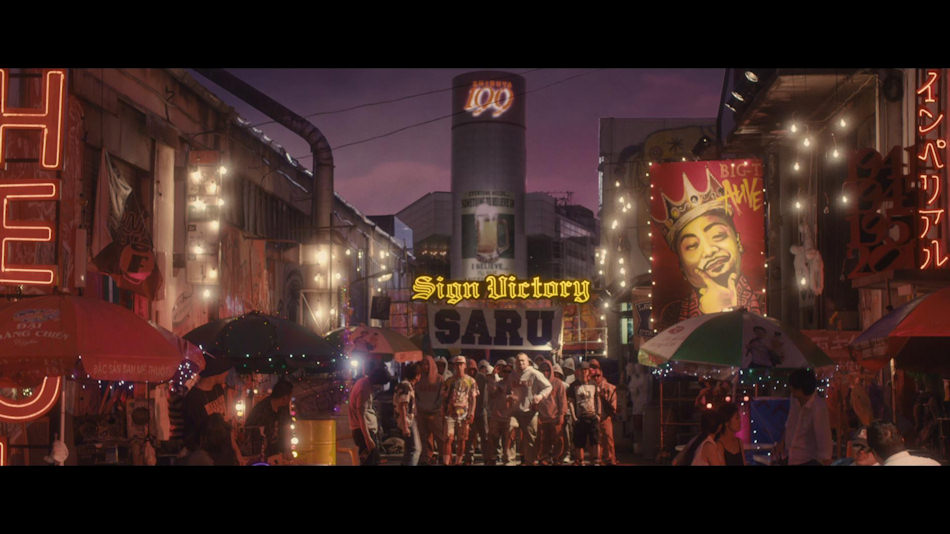 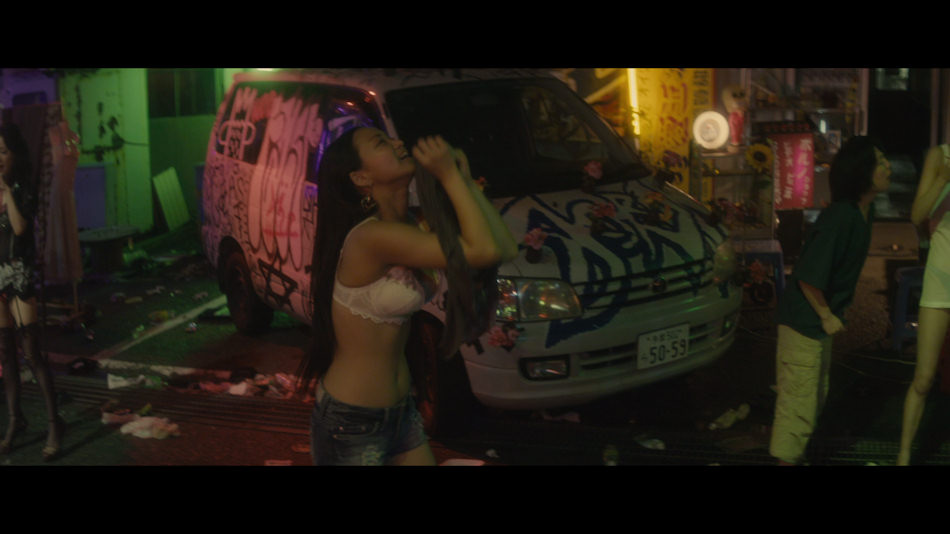 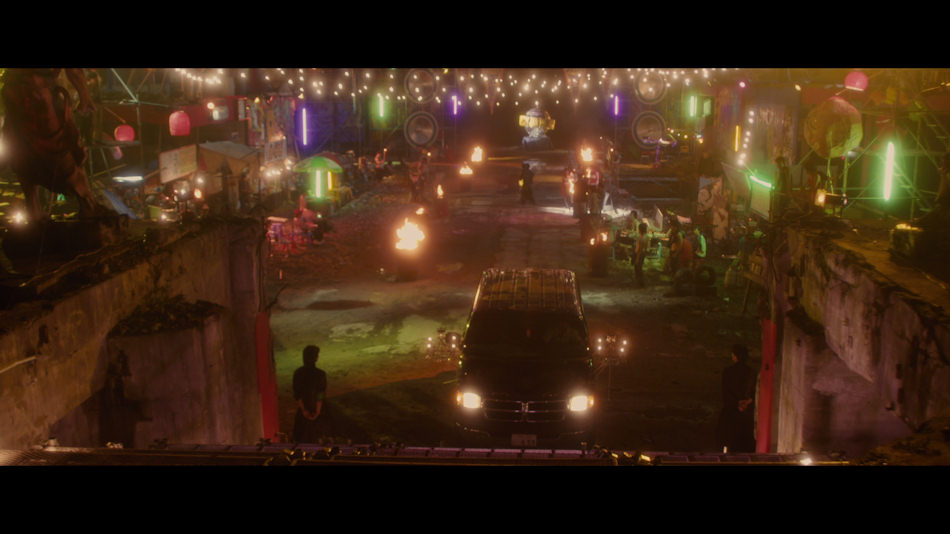 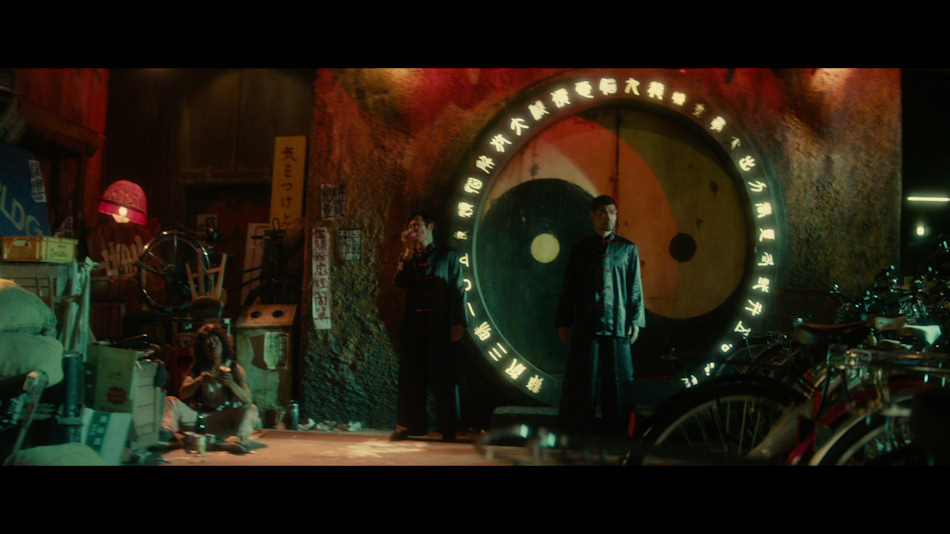 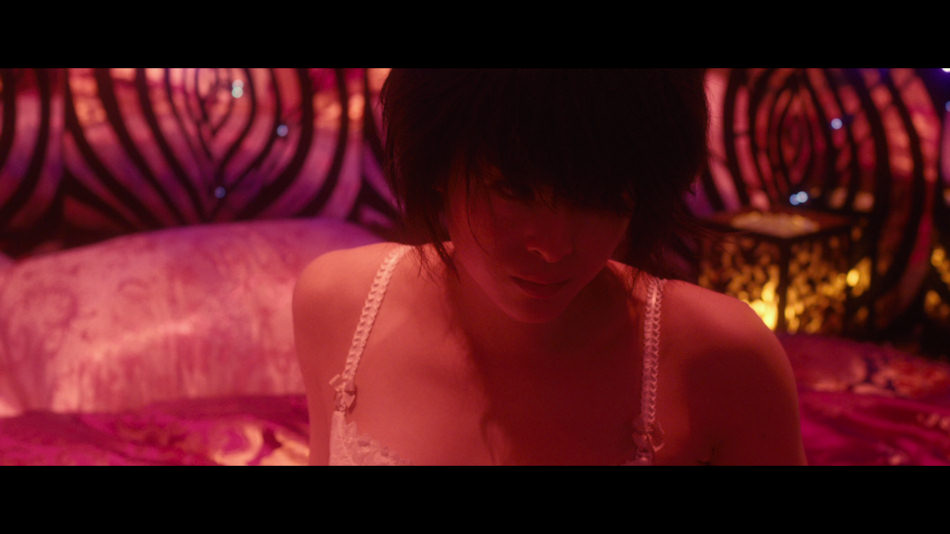 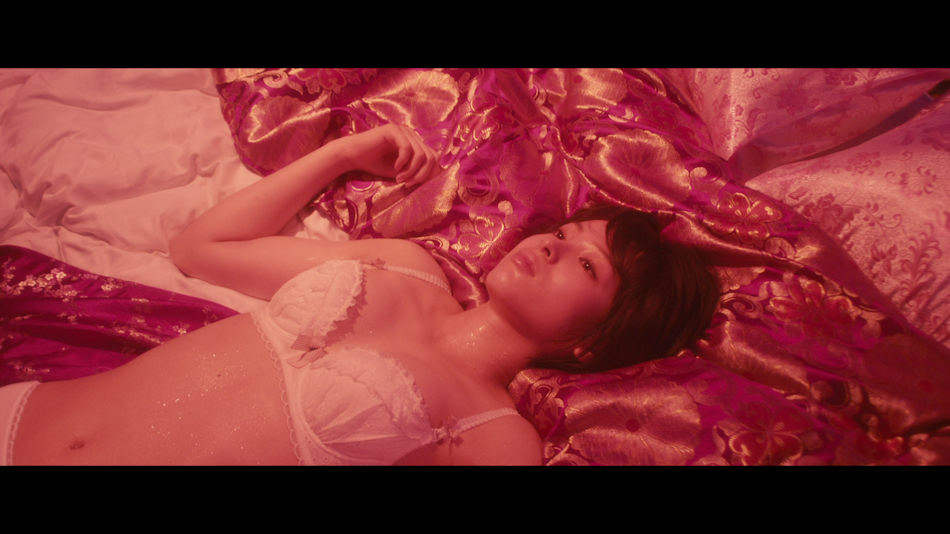 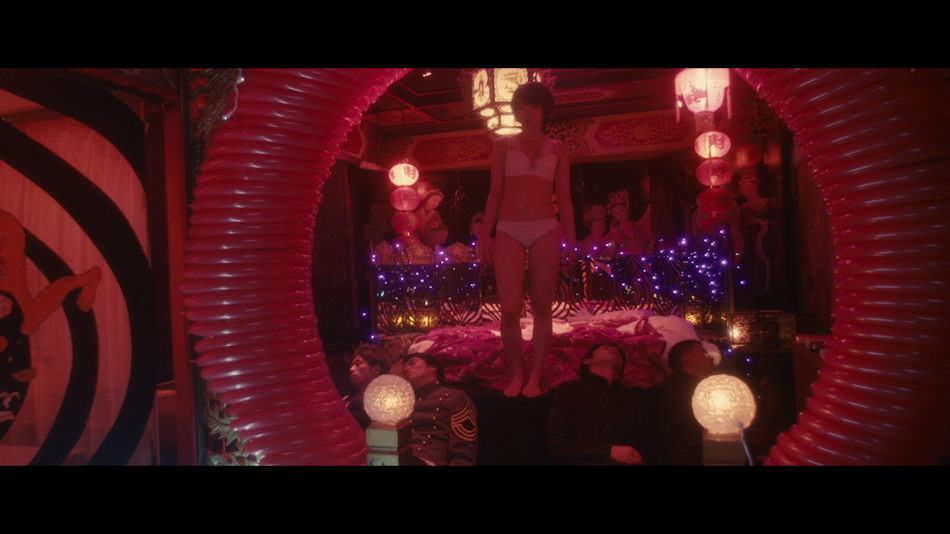 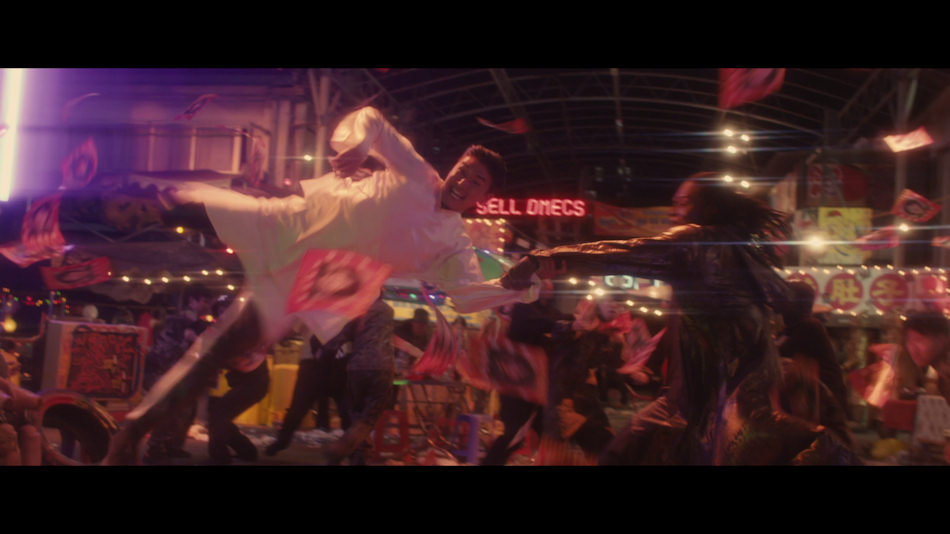 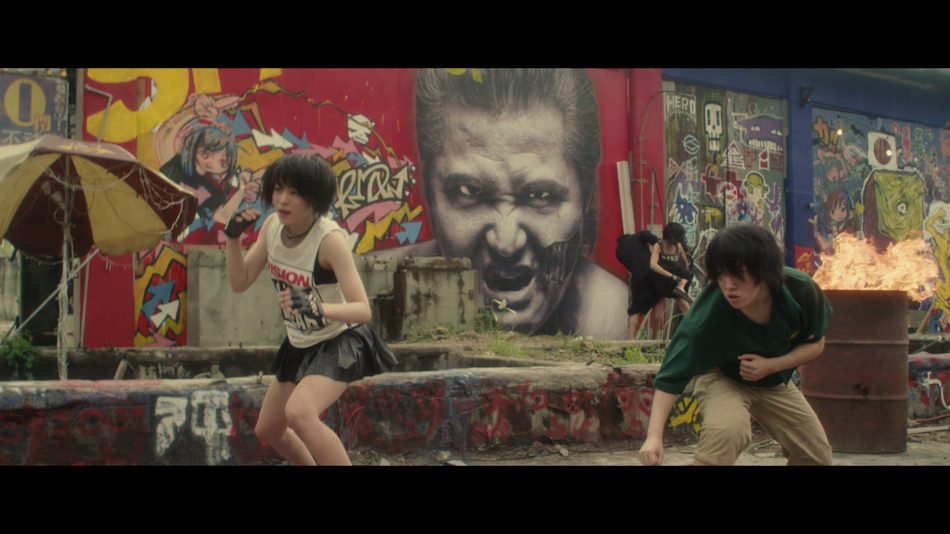 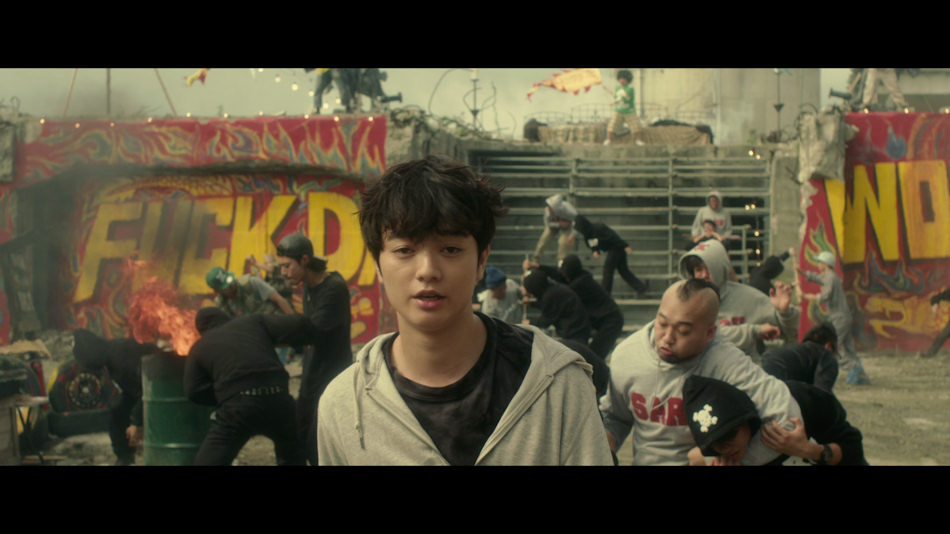