it's my master detective skills at play here, dammit...

So still agree on the fact that Daughter of Darkness II has the slight edge of the first movie due to its female lead? Some nasty shit in there....abortion with a clothes hanger anyone?

Yep...Female lead takes it that LITTLE extra that it needs to slightly edge out the first one....

BROTHER of darkness was good too...
Top

anything on your mind, brad?

a review for you guys

Very lavish visuals, much like the japanese 70’s exploitation films (minus the surrealism of course) but with a little less energy and inventiveness. Gets a bit boring after the half way as there isn’t an awful lot happening aside the sex. Some "good" Cat III humour (which feels a bit like jumping from an airplane without a parachute; a lot of fun but can hurt at times) here and there + plenty of silly sex comedy. The film can certainly be considered bizarre from an average viewers point of view, but some people very familiar with Asian exploitation and Category III classics may be a bit underwhelmed at times. It mostly depends on how much you value the beautiful visuals and how much sex you’re willing to go through for it (joke mostly unintentional).

One major plus for the film is the good cast, with actors such as Kent Cheng (highlight of the movie), Carrie Ng, Lo Lieh and Elvis Tsui making appearances. I’m sure you already knew Amy Yip was in the film.. with a healty dose of her usual Yiptease. The ending is somewhat ambitious too, and very close to the final scene there’s a short scene that has some sort of HK pureness in it which reminded me of the time when HK movies were made (at least partly) out of love and with passion. It made look back for a second or two but I don’t think the rest of the movie had that magic in it. Too much Sex, too little Zen. But even with being a rather mediocre film (although high above the sub-genre (sex) standards, I think) it definitely avoids the corruptness that plagues HK cinema nowadays.
2,5/5

The Joy Sales dvd package is gorgeous and comes with a very nice half-hard cover photo book. The transfer itself is excellent (although the usual blue line is once again present), and it seems like they got the audio right this time. The "mono" track definitely sounds different from the 5.1 mix (which also has sound effects not found on the "mono" track such as more wind and birds and other background noices). However, I've never seen the film before so I don't know how it's supposed to sound like. I can't quarantee the mono is the original one. The sound effects on 5.1 and mono tracks also sound somewhat similiar (aside the added background effects). Quick comparison didn't bring out any big differences. I watched the film in mono, and didn't notice any out of place sound effects. The track is in sync by HK standards. Extras cover the usual trailers and photo galleries (with some good behind the scenes shots) + an interesting interview with the director.

Nice review thanks Hung. That first capture is nice.

This is up there with Naked Killer right?
Top

bradavon wrote:Nice review thanks Hung. That first capture is nice.

This is up there with Naked Killer right?

Naked Killer is more of a campy action film with some nice camera work, while Sex & Zen is a period (sex) comedy with pretty visuals.

Sex & Zen also lives up to it's title (the 'sex' part I mean) while Naked Killer, unlike many think, features almost no nudity (not necessarily a bad think)

Out of the two, Naked Killer is more fun IMO. As far as I remember the HKL is very good.
Top

the Yu Pui Tsuen movies also work with the source novel S&Z is based on and reportedly to much better effect. Ho Fan directed these 80s films, even before the III rating was introduced I believe. Only seen the third one (made in the 1996). More of a raunchy comedy but also a parody of Stephen Chow's Forbidden City Cop. One of Elvis Tsui's funniest roles.
http://www.sogoodreviews.com
http://www.myspace.com/sogoodreviews
http://www.youtube.com/user/KnetanB
Top

I've been posessed by the spirit of Yoda there.. bonkers that film is... mmmm

"The Anthony Wong cult classic Ebola Syndrome will be getting the best release it has ever had in May. It will be 16:9 anamorphic widescreen, with an interview with the director Herman Yau, and commentary with Herman Yau and Anthony Wong!

After that, Chinese Torture Chamber Story will be getting a special edition release. Stay tuned, lots more to come!"

Ebola is a foul classic and this release could be very fun. While both Yau and Wong speak perfectly good English, the track is reportedly in Cantonese. Should make for better flow. Don't get your hopes up about the cut footage being included though.

Torture Chamber is a dear favourite of mine. Can't get more insane than that.
http://www.sogoodreviews.com
http://www.myspace.com/sogoodreviews
http://www.youtube.com/user/KnetanB
Top

a spotlight on one of the more unknown ones: 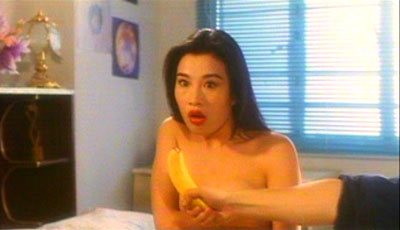 
A cheap film about cheap films, this Category III rated portrayal of the slight rise and hard fall of Chan Hung (Liu Chi-Tak), a Mainland girl turned adult movie star adheres to the usual genre requirements (including softcore sex and gang rape to pass the time. Or rather get the time up to 90 minutes) but director Siu Bong possesses some unusually sharp wit considering what movie he's making.

Check out the spelling on the poster:

Can someone give me the correct running time for Raped by an Angel. I'm halfway through my Universe disc and I a have feeling I'm not seeing everything...

the disc is not uncut (chainsaw killing trimmed among other things) but I believe the running time of 95:16 represents the Category III version in cinemas. Meaning it'a a hell of a lot longer than the pre-cut and subsequently cut UK version.

Still the best comeuppance for a villain EVER.

okay, thanks. The Universe transfer was surprisingly good.

Pretty good film. Even turned into a romantic comedy at one point. Loved that. Only the first 15 min or so wasn't so hot. The rest was quite enjoyable. Near the end I started thinking how cool it would've been if I had been in HK in 1993 watching this film in the cinema... 3,5/5
Top

and Mark Cheng getting AIDS for his crimes. Now that's just classic and completely logical

Cheng is a better actor than his decent into Cat III cinema showed and it was nice to see him return to a big vehicle recently in Election 2.

RAPED is conflicted as per a lot of HK movies but as far as exploitation goes, it's a brew that you love, hate and accept for being loving or hating. Or something. Have nothing against it but strangely enough, Wong Jing waited until late 90s before kickstarting the franchise again. Then it wasn't even III and part 3 even tried to be "classy". A dumb idea Wong Jing came up at the end of the 90s.
http://www.sogoodreviews.com
http://www.myspace.com/sogoodreviews
http://www.youtube.com/user/KnetanB
Top

There's one thing in the film that I really liked: The way it connects reality and fiction. The court room scene re-defines the movie's (english) title and also gives that specific scene a great humoristic boost by indirectly referring to the ironic connection between the film's (english) title what's happening in the film (all the testimonies making him look like "an angel"). I thought that was pretty clever, even though most likely unintentional (which doesn't make it any less great, does it?)

I never looked at the film that deeply...I mean...it's Wong Jing and Andrew Lau FFS!

Now you understand also how the action still that was plastered over the UK release (AND as a matter of fact, HK poster and video art but like the court poster much better) played into the story and this was certainly not a Naked Killer 2 in the making.
http://www.sogoodreviews.com
http://www.myspace.com/sogoodreviews
http://www.youtube.com/user/KnetanB
Top

Has one of my all time favourite flubtitles:

"I will not tolerate such bitch!"

I like the one in Don't Stop My Crazy Love For You:

How nice, a sequel that is better than the original. Sex & Zen had it’s moments but it was still only an average film, 2½ (and maybe not a very strong one) on my scale. Part 2 however is a solid 3 (good thing I didn’t listen to Ken

). The first 35 minutes had me expecting even more but the last two thirds are not quite as good. Still plenty of fun, especially ghost story elements. I only got a bit bored during the climax. I’m not saying Loletta Lee and Shu Qi having sex is a bad thing but it just went on for too long. Ironically I never get tired of watching Loletta with her clothes on. But to put it simple, Sex & Zen 2 is funnier, crazier and more inventive film than the original was and also comes with a great leading lady. Maybe even two if you care about Shu Qi.

The Mei Ah remaster isn’t too bad. Anamorphic widescreen, interlaced, and although the image is nowhere near as solid (plenty of artifacts for example) as the FS master for part one but the colours are very nice. This kind of presentation allows you to enjoy the movie but also reminds you about the origins of the film (which works in this case). The subtitles aren’t exactly good but who cares, watching Sex & Zen 2 is probably more fun with these subs than actual good subs. Sound options are nice, original mono as well as 5.1 mixes in both languages. No problems with the Cantonese mono. Practically no extras (not even trailer) but the menu is nice with a 60 second clip of one of the film’s beautiful songs.

Why so many caps for something that isn’t japanese?

Let me explain. Loletta deserves at least two caps (2&3). One cap needs to display the problems of the transfer (1 / notice that what you see in the cap will be much more noticable in motion and on big screen). One caps need to show the more bizarre content of the film (5). Elvis Tsui needs to be in one (3 again). And to be fair, there should be one Shu Qi cap although personally I could drop it (4).

Who played the mad doc in this film? Very familiar face. I even have a 2 second video clip of him from another movie reacting to something in my head but I can't figure out where it's from and who the guy is.
Top

Hung, do you often get cramped hands?
Top

Want to know my secret? I'm like those strong-willed horror film geeks who never go out killing people in real life. You don't have to react physically to everything you see in movies